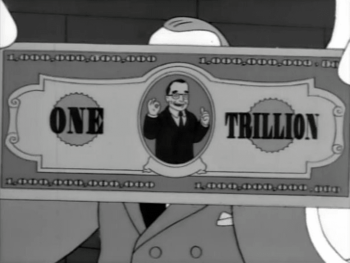 " It was a strange collection, like Billy Bones’s hoard for the diversity of coinage, but so much larger and so much more varied that I think I never had more pleasure than in sorting them. English, French, Spanish, Portuguese, Georges, and Louises, doubloons and double guineas and moidores and sequins, the pictures of all the kings of Europe for the last hundred years, strange Oriental pieces stamped with what looked like wisps of string or bits of spider’s web, round pieces and square pieces, and pieces bored through the middle, as if to wear them round your neck—nearly every variety of money in the world must, I think, have found a place in that collection; and for number, I am sure they were like autumn leaves, so that my back ached with stooping and my fingers with sorting them out."
— Jim Hawkins, Treasure Island
Advertisement:

A MacGuffin of great monetary value (though normally never specifically stated), so great that it could make anyone or any community rich and prosperous, and will never go hungry again. Naturally, it's almost always destroyed, lost, or otherwise gotten rid of at the end of the plot. The monetary value may be an example of Eleventy Zillion.

Not to be confused with Ridiculous Exchange Rates.

Compare Impossibly Cool Wealth. In the future, such a bill would be worth nothing thanks to Ridiculous Future Inflation. An example of Artistic License – Economics on the few occasions it can actually be used in the story, as it would immediately destroy any economy it was introduced to in a realistic setting — if anyone would actually take it, which smarter writers will often use as a plot point. Compare to A MacGuffin Full of Money. At the opposite end of the scale from Worthless Currency.