Film / Too Big to Fail 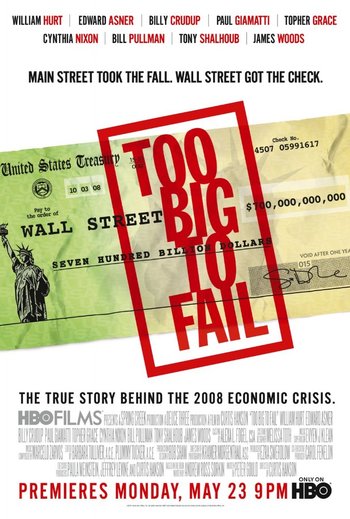 "The plane that we flew in on this morning was leased from AIG... Construction downtown, AIG! Life insurance, 81 million policies with a face value of 1.9 trillion! Billions of dollars in teachers' pensions. It's everywhere! You want too big to fail, here it is!"
— United States Secretary of Treasury Henry Paulson

Too Big to Fail wasn't just the infamous phrase we heard a lot during the economic crash of 2008. It is also a 2011 HBO television movie directed by Curtis Hanson that is a dramatization of New York Times reporter Andrew Sorkin's account of the events that transpired from July 2008 till October 2008 when the decision to bailout all major banks was made. The dramatization serves as a near 90 minute long How We Got Here from the perspective of US Treasury Secretary Henry "Hank" Paulson and his staff consisting of Neel Kashkari, Michelle Davis and Jim Wilkinson.

The movie also initially follows Lehman Brothers CEO Dick Fuld (James Woods) as he tries and ultimately fails to save his bank. All steps are taken including an attempt to sell the bank piecemeal to several banks. The movie explores the stock market crash of mid September 2008, what role Lehman's failure played in it, and how the impending failure of insurance Mega-Corp AIG pushed the economy over the edge. The movie also explores the ancillary role that the presidential election campaigns played during the crisis. The final part of the movie goes into the rationale behind the controversial Troubled Assets Relief Program aka the bank bailouts.