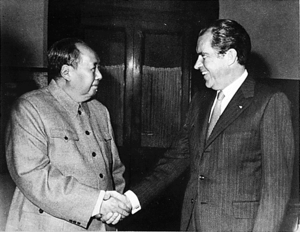 "Realpolitik" is one word. If you were redirected to here and it says "Real Politik" or something similar, please change it on the original page you linked from. Thank you.

If you ask a diplomat who is not an ideologue exactly why their country is behaving in a ruthless or manipulative manner they will usually, if you can blast your way through all the skillful deflections and rhetoric, respond with this argument: "We're protecting our interests. It is what every other country is doing, and we'd be foolish not to do so too. My Country, Right or Wrong."

This line of cynical philosophy is essentially Nice Guys Finish Last among states, and has been around since two groups of people got together and decided that there were issues which could only be resolved by one side getting what they wanted at the expense of the other. If you ask The Empire, "Why are you taking over our country?" they will respond, "To make sure the other empire doesn't first."

Proponents of this way of thinking would say that there are a lot of big, nasty states committing Gambit Pileups against each other out there, and that if you try being nice, your rivals will simply exploit this, so you must always further your interests where you can as no one else will. Besides, if you try to "help", you could be accused of interfering with the business of other countries to further your own influence. Critics would, of course, point out that it is this kind of thinking which perpetuates Chronic Backstabbing Disorder among nations, and that it is essentially "Might Makes Right" as a political philosophy.

A more benevolent follower of this philosophy would be content to be nothing more than A Hero to His Hometown.

Compare Hobbes Was Right, Well-Intentioned Extremist, The Empire, My Country, Right or Wrong, Gambit Pileup and Personal Hate Before Common Goals. Contrast Machiavelli Was Wrong, as well as Enlightened Self-Interest, where countries act to benefit each other in order to advance their own interests. Proxy Wars are a specific execution of realpolitik.