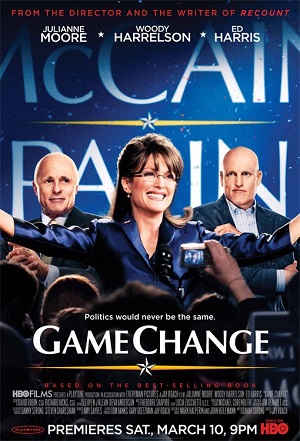 Steve Schmidt: I'm amazed that someone who has been in politics this long takes all the petty stuff so personally.
Rick Davis: And that's why they are who they are. Reagan, Bush, Clinton... All they want is to be loved. The ones that don't pathologically need to be loved, they don't get the nomination. They don't get to be president. If you'd understood that fact, you might have been able to better handle our Alaskan moose hunter. God, it was a tough campaign.
Schmidt: It wasn't a campaign, it was a bad reality show.
Advertisement:

Game Change is the 2010 book by John Heilemann and Mark Halperin that documents the 2008 race between Barack Obama and John McCain, and the events leading up to it.

It covers all the major events of the campaign, with most of the focus on the contentious Democratic primaries, in particular the fight between Barack and Hillary. In addition, it offers startling and perceptive insights into the behind-the-scenes drama during the election — Obama’s attempts to remain in the race; the Clintons’ increasing ire at the media for its soft coverage of Obama; the complete destruction of Edwards’ campaign and marriage before, during and after his affair with videographer Rielle Hunter; the last-minute switchout of Sarah Palin over Joe Lieberman for Republican vice president; and the increasing chaos of the McCain campaign after the financial crisis, and through it all the constant interplay and threats of racism and sexism.

A TV film based on the book, primarily focusing on Sarah Palin, aired on HBO in 2012. It starred Julianne Moore as Palin, Woody Harrelson as Steve Schmidt, and Ed Harris as John McCain.

The book features examples of:

The TV movie features examples of: