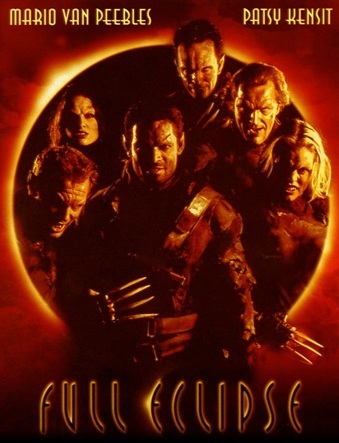 There's a new police force on the streets...and they only come out at night.
Advertisement:

Full Eclipse is a science fiction/horror/action film directed by Anthony Hickox that was released on HBO in 1993. It stars Mario Van Peebles as LAPD detective Max Dire, who is considering leaving the force after his wife accuses him of being too invested in the job and his partner Jim (Tony Denison) gets blown into the ICU following a botched hostage situation, comes out as "Dirty Harry on crack" (as Max puts it) then blows his own head off in the middle of a cop bar. This brings Max to the attention of Adam Garou (Bruce Payne), a high-ranking officer distinguished by his success in reducing crime in other big cities who invites him to join him and a group of other police officers who are experiencing similar problems. Turns out, the group is actually a special tactical unit specializing in brutal raids and assaults on criminals.

Oh, and they're all werewolves.

Max is brought into the fold by Garou's girlfriend, Casey Spencer (Patsy Kensit) who reveals that Garou has developed a serum that makes them all faster, stronger and more capable to take on the revved up criminals of Los Angeles. At first, Max dives headlong into the team's activities until he starts to realize that Garou may not be the benevolent cop he originally thought he was. As the full eclipse edges closer and Garou's plans near fruition, only Max stands in his way.

The film received mixed to positive reviews upon its release and has become something of a cult classic. Bruce Payne's performance is generally looked upon as one of the best things about it, even today.