The Call Knows Where You Live 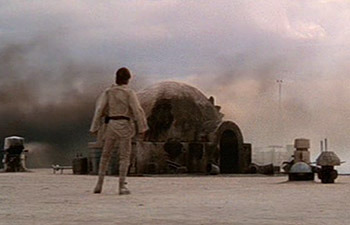 Uncle Owen?! Aunt Beru?!
"Life is good. I hope I never have to leave my beloved village."
— Erik the Swift,note Moments before his alien abduction The Lost Vikings

Even if a hero wishes to refuse the Call to Adventure, destiny has ways of making sure that it can't be ignored. One of which is to strike the hero right where they live.

If the villain or villains were not introduced earlier, it is usually at this point where they will make their presence, and their evil, felt for the first time. Friends or loved ones may be hurt, kidnapped or outright slain. Homes or even hometowns may get razed to the ground. The hero may well find themselves actively hunted or worse. Whatever the form it takes, bad and often tragic things happen to the hero and their world, and the point is driven home that they can't run away from their life mission.

Embittered and hardened by the experience, The Hero thus takes up the call, either to avenge those that were hurt or slain, rescue those who were kidnapped, make the villains stop making their life a living hell, and/or make sure that whatever happened does not happen again to anyone else. Many an Anti-Hero has been shaped by this. He Who Fights Monsters almost certainly has. Multiply at least twofold if The Hero tried Starting a New Life.

This trope may be referenced in a Troubled Backstory Flashback. Villains may inflict this on the hero's friends because "They Were Holding You Back". The Forgotten Fallen Friend is the trope where, after the hero starts the adventure, he or she gets over the deaths with remarkable aplomb.

Overlaps with Doomed Hometown, only this trope is often viciously more personal; sometimes overlaps with Death by Origin Story. Compare with The Villain Knows Where You Live, a possible reason why the call keeps coming. Contrast with Plot Detour; Kidnapped by the Call, for a heroic variant; and Stuffed into the Fridge, where the similarly personal tragedy is exceptionally cruel but there was no Refusal of the Call and the event seems largely unnecessary for the story. See also Nice Job Breaking It, Hero!, for when this is the result of a Self-Fulfilling Prophecy.

Not to be confused with The Calls Are Coming from Inside the House or a character being Forced from Their Home.

After the events of Warlords of Draenor and Legion, Thrall leaves the Horde behind to live quietly with his family in Nagrand.

After the events of Warlords of Draenor and Legion, Thrall leaves the Horde behind to live quietly with his family in Nagrand.