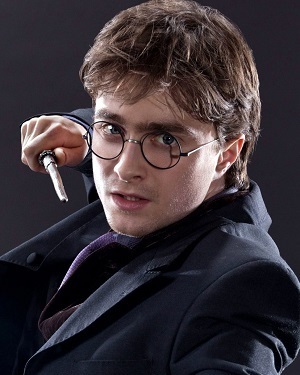 "I don't go looking for trouble. Trouble usually finds me."

"Gee, I wonder what it'd be like to have a difficult life."

The Boy Who Lived.

At the age of one, Harry's parents are killed by Lord Voldemort, who then attempts to kill him with the Killing Curse. Due to The Power of Love from his mother's self-sacrifice, however, he survives and rebounds the curse upon Voldemort, getting a lightning bolt-shaped scar as a souvenir. The series' resident Eccentric Mentor, Dumbledore, then arranges to have his Muggle aunt and uncle take him in... or else. For ten long years, they grudgingly comply, forcing Harry to live in the cupboard under the stairs and being both cruel and neglectful of him. Harry's bullying cousin, Dudley, doesn't make things any easier.

Then, shortly before his eleventh birthday, everything changes. Letters (from "no one") begin arriving in Harry's "home", growing by the number each day. Harry's aunt and uncle, acting suspiciously, refuse to allow him to read even one, and after several days, leave the house and go to a tiny house in a cliff in the middle of a storm. Unfortunately (for the Dursleys), the ones who sent the letters are not deterred by such means, and Harry is eventually told of his past, and the wizarding world.

Thus, Harry's adventures at the Hogwarts School of Witchcraft and Wizardry begin, growing darker in nature each year, as he learns of his destiny, and matures.

Nineteen years after he defeats Voldemort for good, he's married to Ginny Weasley and is the father of three children: James Sirius, Albus Severus, and Lily Luna Potter.

Example of:
Moment of Silence