Applicable to all Centaurs
Bane
Firenze 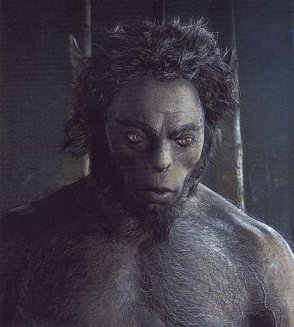 "Unicorn blood will keep you alive even if you are an inch from death... but at a terrible price."

The Centaur that rescued Harry from Quirrell in the Forbidden Forest when he was serving detention in Philosopher's Stone. When Dolores Umbridge fired Sybill Trelawney in 1996, Dumbledore hired him to replace her so as to prevent the Ministry from installing another puppet teacher. After Umbridge's removal at the end of the year, Trelawney was reinstated and the Divination curriculum was split between them, much to her irritation.

Unlike other Centaurs, Firenze is polite and friendly to humans, even allowing the 11-year old Harry to ride on his back when taking him to safety. This made him unpopular among his kind and his herd attempted to kill him after his hiring as Professor for daring to spread the Centaurs' art of Divination to humans. Hagrid rescued him, but he was banished from the herd and the forest for his transgression. 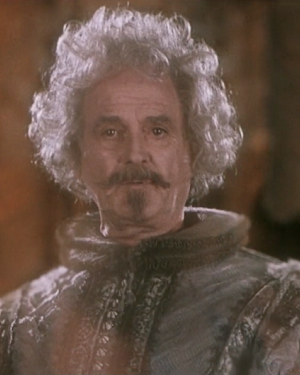 Portrayed by: John Cleese
Voiced by: Alfonso Ramírez (Latin American Spanish)
Appears in: Philosopher's Stone | Chamber of Secrets | Prisoner of Azkaban | Goblet of Fire | Order of the Phoenix | Half-Blood Prince | Deathly Hallows
"Half an inch of skin and sinew holding my neck on, Harry! Most people would think that's good as beheaded, but oh, no, it's not enough for Sir Properly Decapitated-Podmore."

The resident ghost of Gryffindor House. Known in life as Sir Nicholas de Mimsy-Porpington, he was beheaded (well, nearly) on Halloween in the year 1492. As per Jacob Marley Apparel, he is now stuck spending eternity with his head just barely connected to his body by a thin strip of flesh. This makes him ineligible for the Headless Hunt, much to his chagrin.

Nick is occasionally proud and pompous, but is nevertheless always a friendly mentor to young Gryffindors. He appears in all the books, but in only the first two movies. 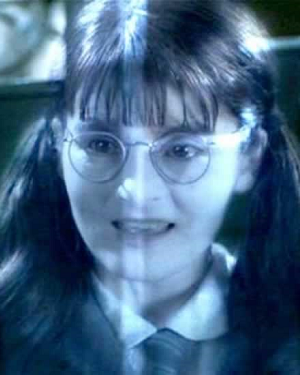 Portrayed by: Shirley Henderson
Voiced by: Mayra Arellano (Latin American Spanish)
Appears in: Chamber of Secrets | Goblet of Fire | Half-Blood Prince | Cursed Child
"No one wants to upset me! That's a good one! My life was nothing but misery at this place and now people come along ruining my death!"

The ghost of Myrtle Elizabeth Warren, a Muggle-born girl who attended Hogwarts at the same time as Tom Riddle and Rubeus Hagrid. She was murdered by Riddle, via the basilisk, and he used her death to create the diary Horcrux. After spending some time haunting the Alpha Bitch who tormented her when she was alive, the Ministry of Magic forced Myrtle to go haunt the place of her death instead. This was the bathroom containing the entrance to the Chamber of Secrets and she has remained there ever since.

She is, as Hermione tactfully observes in the second movie, "a little sensitive". "A little sensitive" means that she is an insane Large Ham with a Hair-Trigger Temper. In Myrtle's mind, everyone is constantly making fun of her and talking about her behind her back. Of course, this behaviour causes people to make fun of her and talk about her behind her back. She also develops a humorous crush on Harry, although he generally finds her annoying. 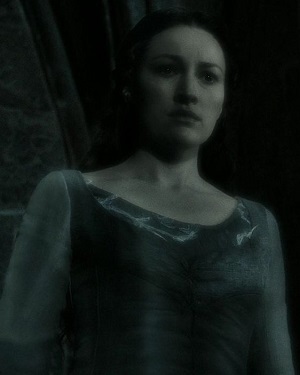 The resident ghost of Ravenclaw House. Known in life as Helena Ravenclaw, the jealous daughter of Rowena Ravenclaw herself, she stole her mother's diadem and was subsequently killed by the man who would become the Bloody Baron. Centuries later, she was effectively manipulated by the charms of one Tom Riddle. She revealed the location of her mother's diadem to him and he turned it into a Horcrux. 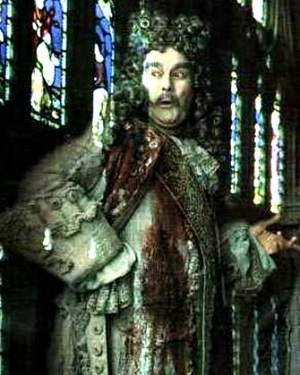 The resident ghost of Slytherin House. In life, he was infatuated with Helena Ravenclaw. Some time after Helena had run away with her mother's diadem, Rowena was dying and sent the baron to find her daughter. He found her, but killed her in the struggle to bring her back. Realizing what he'd done, he then killed himself. As per Jacob Marley Apparel, he will spend eternity covered in blood, hence the nickname.

During the time frame of the series, he is regarded as cold and mysterious, even by the other ghosts. For some reason, he is the only individual, other than Dumbledore, who can control Peeves. 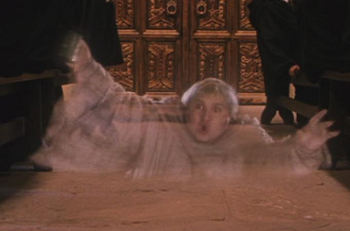 Portrayed by: Simon Fisher-Becker
Appears in: Philosopher's Stone | Chamber of Secrets | Goblet of Fire | Order of the Phoenix | Deathly Hallows

The resident ghost of Hufflepuff House. He seems to be cheerful and comical in personality, but nothing else is known about him other than the fact that he was evidently a friar when he was alive. Well, it is Hufflepuff House, after all.

Applicable to all non-beings
Dementors 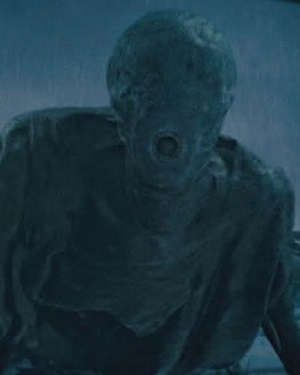 "I must warn you. Dementors are vicious creatures. They do not distinguish between the one they hunt and the one who gets in their way."
— Albus Dumbledore

Uncanny creatures in black cloaks that are essentially walking (err, make that floating) Mind Rapes waiting to happen. Initially, they serve the Ministry of Magic as guards for Azkaban, but care nothing for human morality; all they want are victims whose emotions they can feed on, and they're more than willing to switch their allegiance to Voldemort when he offers a better deal. Notable for being Harry's worst fear, because they can use their powers to force him to relive the many traumatic experiences of his life, particularly his parents' deaths. 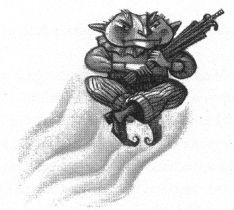 Appears in: Philosopher's Stone | Chamber of Secrets | Prisoner of Azkaban | Goblet of Fire | Order of the Phoenix | Half-Blood Prince | Deathly Hallows | Hogwarts Mystery
Nearly Headless Nick "My dear Friar, haven't we given Peeves all the chances he deserves? He gives us all a bad name and you know, he's not really even a ghost."

A poltergeist who haunts Hogwarts, making mischief wherever he can. He's not considered a ghost by the "other" ghosts, but he's often classified as one for convenience. However, it's worth noting that Peeves is not white or transparent, but is rather solid-looking and often dressed in loudly-coloured clothes. Rowling defines Peeves as "an indestructible spirit of chaos" and that he "came with the building."

Peeves has no agenda, no motivation, no goals other than to create as much chaos as possible because It Amused Me. He is rude, crude, fond of practical jokes, and takes orders from no one other than the Bloody Baron, though he also shows some respect to Dumbledore and the like-natured Weasley Twins. Peeves and Filch are constantly at war with each other, a conflict Harry and his friends generally do not involve themselves in.

Although Peeves has a sizable role in all the books and some of the video games, he never appears in the movies (a scene was filmed though, where he was portrayed by Rik Mayall).

Applicable to all house elves
Dobby 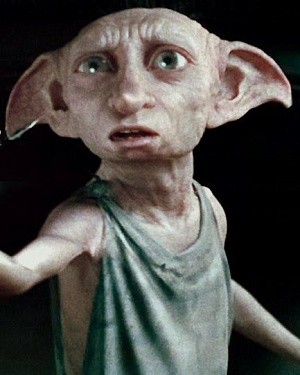 "Dobby never meant to kill! Dobby only meant to maim, or seriously injure!"

"Dobby is used to death threats, sir. Dobby gets them five times a day at home."

A house elf who initially serves the abusive Malfoy family. Unlike his masters, he admires Harry and tries to warn him and protect him when Lucius Malfoy orchestrates the opening of the Chamber of Secrets... in unfortunate ways. He is eventually freed thanks to Harry and gets new employment in the kitchens at Hogwarts, from where he occasionally lends Harry a hand. 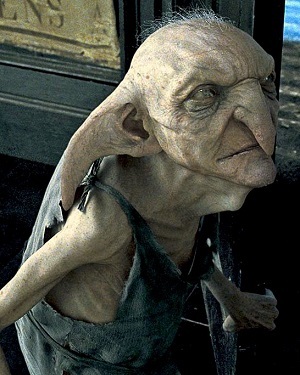 "Nasty brat standing there as bold as brass. Harry Potter, the boy who stopped the Dark Lord. Friend of Mudbloods and blood-traitors alike. If my poor mistress only knew..."

A house elf who serves the Black family. He shares the same ideologies as many of the pure-blood wizards, and looks down on Muggle-borns. Sirius Black treats him harshly, which leads to some unfortunate events at the end of Order of the Phoenix. 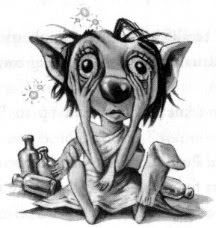 The Crouch family house-elf. She is extremely loyal to Barty Crouch, Sr. and very happy with her lot in life. For years, she cared for Crouch's imprisoned son, but she was fired as punishment for failing to keep him under control at the Quidditch World Cup. Winky eventually came to work at Hogwarts, where she was very unhappy and constantly worried about how her master was getting on without her. Remaining loyal to Crouch, Sr. even after he had sacked her, she refused to divulge any of his dark secrets.

The Hogwarts House-elves
The house-elves who live and work in the Hogwarts kitchens, cooking for the students. Led by Pitts in 1988.

Applicable to all giants
Grawp

Portrayed by: William Todd-Jones
Appears in: Order of the Phoenix | Half-Blood Prince | Deathly Hallows
Hagrid: See — he's my brother! Well — half-brother. Turns out me mother took up with another giant when she left me dad, an' she went an' had Grawp here...

Mentioned in: Harry Potter and the Order of the Phoenix

The Gurg (leader) of the last remaining giant colony in the world. Hagrid and Maxime seemed to be making progress in getting him on their side before he was killed by Golgomath.

Mentioned in: Harry Potter and the Order of the Phoenix
Hagrid: "There was a new Gurg, Golgomath. Well, we hadn' bargained on a new Gurg two days after we'd made friendly contact with the firs' one, an' we had a funny feelin' Golgomath wouldn' be so keen ter listen to us, but we had ter try."

The Gurg of the giant colony who kills Karkus and allies with Voldemort.

Applicable to all goblins
Griphook 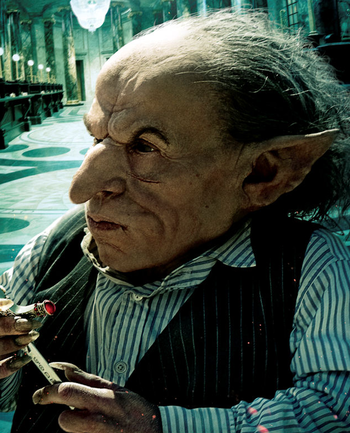 A goblin working in Gringotts Wizarding Bank. He takes Harry to his family vault during his first visit to Diagon Alley, and six years later helps him break into the bank in exchange for the Sword of Gryffindor.