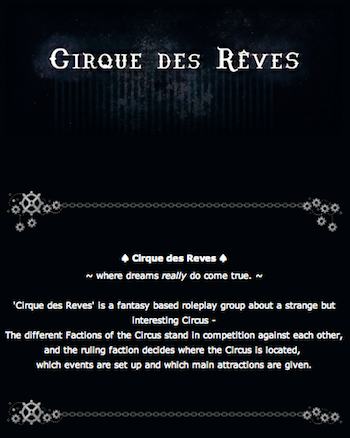 Back in Black and better than ever.
Advertisement:

is an art and roleplay group primarily on DeviantArt. Taking place in a travelling circus in the late 1890s, many supernatural creatures are members of this wondrous circus. It travels from place to place and only performs at night. With howreal the feats of magic seem, many pass off the visit as nothing more than the dream the name promises itself to be.

No relation to The Night Circus.

The Circus is divided into four main factions: Black, White, Red, and Diamond factions, with a fifth, Dream, filled with the Leaders. The factions compete against each other with good works and amazing shows (art and roleplay submissions) to earn points. Whichever faction has the most points picks the next location based on various cities that represent various symbols of each faction. Even the staff take up a favored faction for any points they earn to go to.

At then end of May 2014, the founder announced that they were revamping the system, though save for a shorter mod list, being hard on Halfbloods, a new skin, and moving one job to a different faction, it has remained the same. It will also end up much smaller, with a maximum group size of about 60 people. It opened for members again on 15 August 2014.

. Each of them will handled at least two characters for the Dream Faction, although who's who is mostly unknown.

Also has an askblog tumblr run by the mods here

. It deals with questions sent in by members or other fans, and can be answered both in and out of character.