Listed below are Voldemort and his followers, the enemies of Harry and his friends. The name of the group comes from their belief that they can "conquer death". Mortal enemies of the Order of the Phoenix, the Death Eaters' goal is to exterminate all "impure" wizards, create a new world order in the wizarding society, and (eventually) achieve immortality. During both the First and Second Wizarding Wars, they are Voldemort's inner circle and act as the elite force in his army.

Death Eaters are recognisable by the Dark Mark, a magical sign branded into their forearms by Voldemort that burns whenever he summons them to him. The Dark Mark also serves as a Calling Card, which Death Eaters cast into the sky over the scene of a murder.

An evil wizard who is active nineteen years after the end of the Second Wizarding War, is gifted with power approaching that of the Dark Lord himself, and is intent on overthrowing the Ministry of Magic while resurrecting the ideals of the Death Eaters. With a small cabal of followers and just enough Unwitting Pawns, the Augurey is fated to challenge the peace Harry brought to the world by fighting Lord Voldemort.

For tropes applying to them before The Reveal, see Delphini Diggory's folder on Harry Potter – Other Characters. 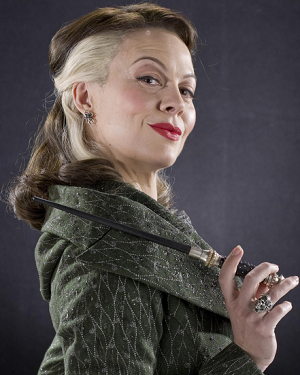 Narcissa is a pure-blood witch, the wife of Lucius Malfoy and the mother of Draco Malfoy. She is the youngest sister of Bellatrix Lestrange and Andromeda Tonks. Although never officially a Death Eater herself, Narcissa believes in the importance of blood purity and supports her husband in following Lord Voldemort during the First and Second Wizarding Wars. 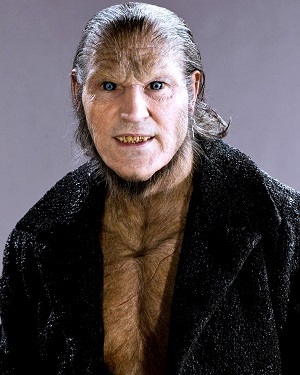 "He doesn't have the stomach, like his father. Let me finish him in my own way."

Fenrir Greyback is a massive, dangerous werewolf. He has been around for many years, and is the werewolf who bit and converted Remus Lupin. He is one of the few who not only accepts, but embraces his lycanthropy, and tries to bite and convert people on any occasion. He participates in the Battle of Hogwarts, where he is knocked out by Hermione and Professor Trelawney while trying to bite Lavender Brown. 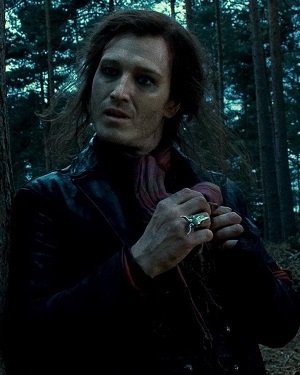 Scabior is a member of the Snatchers, a loose group of mercenaries hired by Voldemort to hunt down those who violate his reign of terror. His particular band of Snatchers captures Harry, Ron and Hermione. After consulting with Fenrir Greyback, Scabior takes the Trio to the house of Malfoy. He wants to keep the Sword of Gryffindor for himself, so when Bellatrix Lestrange tries to take it from him, he resists, and she knocks him out.

Scabior's role was expanded in The Film of the Book, where he has become the leader of the Snatchers, and takes a perverse interest in Hermione. His sarcasm has been downplayed in favour of his creepy qualities, and his confrontation with Bellatrix is extended. Also, he is seen near the beginning as one of the people dragging captives into the Ministry of Magic. 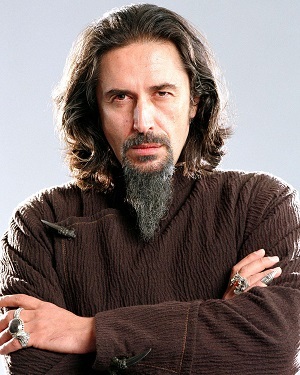 "It's happening again, like before, and soon neither you nor anyone else will be able to deny it."

The Headmaster of the Durmstrang Institute. Karkaroff is a former Death Eater who avoided imprisonment in Azkaban by becoming an informant for the Ministry and selling out several of his former comrades. He arrives at Hogwarts in the fourth book as one of the judges of the Triwizard Tournament. Above all else, Karkaroff is terrified by what Voldemort could do upon returning to power. 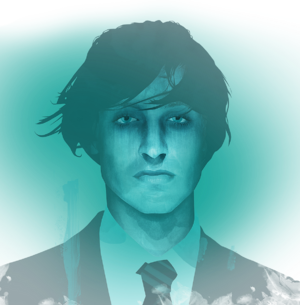 "I know I will be dead long before you read this but I want you to know that it was I who discovered your secret."

The Notorious R.A.B. was Sirius Black's younger brother. Unlike Sirius, Regulus fully approved of his family's fascination with the Dark Arts and pure-blood supremacy and went as far as to join the Death Eaters. However, he quickly discovered that Evil Is Not a Toy and tried to back out, ultimately resulting in his death. Before his death, he discovered the secret of Voldemort's Horcruxes and stole Slytherin's Locket, meaning to destroy it, but was killed by the Inferi guarding the cave in the process. 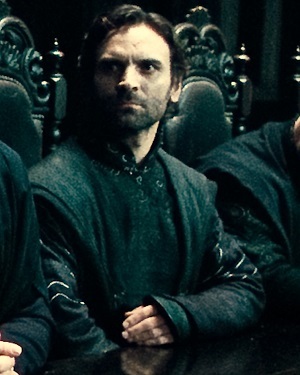 One of the most powerful and earliest Death Eaters, Dolohov was imprisoned in Azkaban after the First Wizarding War. He was broken out in 1996 by Voldemort alongside nine other Death Eaters. He would rejoin his master's cause, participating in many of the battles of the Second Wizarding War and killing Lupin during the Battle of Hogwarts, where he meets his end at the hands of Filius Flitwick. 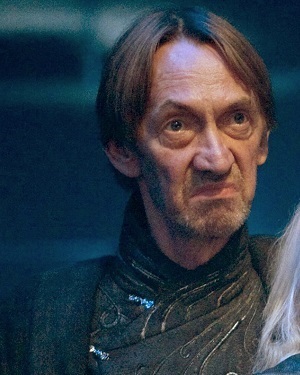 Portrayed by: Peter Best
Appears in: Prisoner of Azkaban | Goblet of Fire | Order of the Phoenix | Deathly Hallows

Buckbeak's would-be executioner in Prisoner of Azkaban. Later revealed to be a Death Eater.

Appears in: Order of the Phoenix | Deathly Hallows | Cursed Child

An Unspeakable at the Department of Mysteries, Rookwood served as a spy for Voldemort within the Ministry of Magic, using his numerous connections to gain information. He was imprisoned in Azkaban after the First Wizarding War thanks to information provided by Igor Karkaroff, but was broken out in 1996 alongside nine other Death Eaters.

Appears in: Goblet of Fire | Order of the Phoenix | Deathly Hallows

The husband of Bellatrix Lestrange, and brother of Rabastan Lestrange. Was imprisoned for the torture of Neville Longbottom's parents, but was later broken out when Lord Voldemort returned. Also participated in the Battle of the Department of Mysteries.

A Death Eater who was imprisoned after Voldemort's first downfall. He later breaks out where he takes a post at the Ministry of Magic. He is one of the Death Eaters who attempts to arrest Harry at the Lovegood Manor and later encounters the trio when they attempt to break into Gringotts. 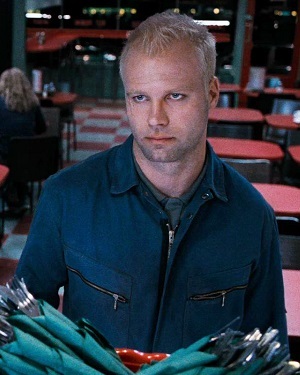 A large and cruel Death Eater. He was first seen during the Battle of the Astronomy Tower. He later encounters the Trio in a Muggle cafe in London where he and Dolohov attempt to capture them, but fail.

Brother of Rodolphus Lestrange and brother-in-law of Bellatrix. Was imprisoned after torturing the Longbottoms, but escaped with others shortly after Lord Voldemort's return. Also participated during the battle at the Department of Mysteries.

One of the original Death Eaters who fights in the First and Second Wizarding Wars. He is the father of Theodore Nott, a classmate of Harry's.

Appears in: Goblet of Fire | Order of the Phoenix | Half-Blood Prince

A family whose two members are Death Eaters. The elder was one of Voldemort’s original followers and the younger participates in the Battle of the Department of Mysteries. Considering the age gap, they might be father and son.

A Death Eater who fights in the Battle of the Seven Potters and later accompanies Travers to the home of Xenophilius Lovegood.

Appears in: Goblet of Fire | Order of the Phoenix (Crabbe only)

A pair of thuggish Death Eaters who are the fathers of Vincent Crabbe and Gregory Goyle. A fansite analysis

deduces the Death Eater who had his head turned into a baby's head in the Department of Mysteries was most likely to be Crabbe.

Other Death Eaters
A variety of Death Eatersnote Including Gibbon, Jugson, Lestrange, Rosier, Evan Rosier, and Wilkes who variously died before the series, disappeared halfway through, or were only referenced off-hand.