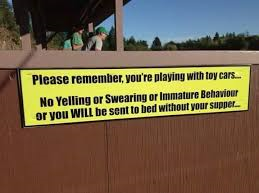 Remember: You're never too old to be sent to bed without supper
"Fine! Then go ahead and STAAAAAAAAAARVE!!!!! [to his servants] If she doesn't eat with me, then she doesn't eat at all!"
— Beast, Beauty and the Beast
Advertisement:

So a character has apparently said and/or done something to anger an authority figure. What's the best course of action to take? Why, punish them by depriving them of either breakfast, lunch, dinner, or all three meals together, of course! Likely to involve the following variations:

At one time this was a fairly common punishment for disobedient children in Real Life. These days it's generally considered abusive to actually starve your kids, although the third type above is still reasonably acceptable (being sent to bed without dessert is a common threat to misbehaving children even today, especially of the "no dessert until you eat your vegetables" variety).

Withholding food is also used by villains to punish prisoners who are uncooperative when the prisoners don't go for I'm Not Hungry first. (The exact opposite punishment is Force Feeding.) And, of course, servants may be threatened with this by their masters in order to keep them in line.

One of the earliest examples of this trope is the Greek myth of Tantalos, making this Older Than Feudalism. After feeling jilted by the gods, Tantalus invited them over for a meal at his palace, where he fed his own children to them as revenge. Disgusted, the gods sent him to eternal punishment in the underworld. He would stand in a pool of water with a grape vine overhead — but whenever he tried to drink or eat, the water and grapes would move beyond his reach, making him suffer eternal of thirst and hunger (hence, the word "tantalize").

Compare the Lysistrata Gambit, which is the denial of something else that people hunger for.