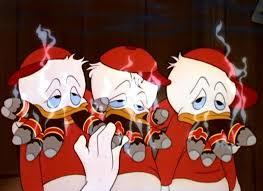 That'll learn 'em!
"Daniel talks to Amanda, who says that the first time Jigsaw kidnapped her it was because she was a junkie, and that this time must be cause she started cutting herself. Oh yeah Amanda, you don't want to let Jigsaw catch you doing that. He'll make you smoke the whole pack of razors!"
— The Kill Count, on Saw II
Advertisement:

Alice wants something she shouldn't have. Knowing this, somebody else responds by giving it to her, as much or as frequently as she wants, to the point where she can't stand it anymore and voluntarily refuses it. An Aesop is had by all.

This trope is named for a Mrs. Piggle-Wiggle story about a little girl who hates taking baths. Her family lets her go unbathed for quite some time (maybe a week, but don't think about it too hard). Eventually, she is covered in a layer of dirt thick enough that her parents secretly plant radish seeds there. The seeds sprout in a day or two, and when the girl sees them, a Freak Out ensues. She screams for a bath, her parents have her take a shower instead, which she willingly stays in for hours until she is spotless, and she never wants to go without her nightly bath again.

This seems particularly common in kids' stories where the moral is "your parents know best, and they really do love you, even when they don't give you what you want."

A once-common subtrope of this, now a Dead Horse Trope, is parents who catch their kids with cigarettes forcing them to smoke a whole carton, which will make them so sick they'll never want to touch a cigarette again.

Compare Be Careful What You Wish For, Exact Words, Literal Genie, and Reverse Psychology. Can overlap with Jackass Genie on the parents' part if they fulfill the child's wish by giving them only the negative aspects of what they want, without any of the good. If the child's punishment is essentially self-inflicted (i.e. they steal the Forbidden Fruit and experience its unpleasant consequences), it becomes a case of The Punishment Is the Crime.

Definitely Truth in Television, as many a parent has managed to give his beer-craving teenage son a disgustingly warm beer. Accordingly, this trope can often be averted in real life too; for some, no excess amount of their favourite food or beverage will ever be enough to make them go off it.

One should note that beyond the obvious health risks involved, on a purely educational level this method can quickly become a Broken Aesop. When your kid asks for chocolate and you reply by saying he'll never be allowed to eat anything else again, you're pretty obviously not giving him "what he wanted", you're just being mean.