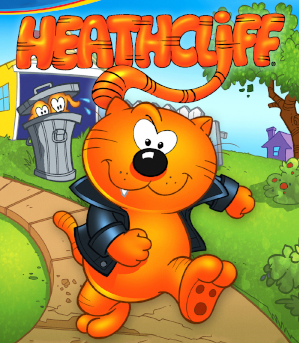 Heathcliff is a streetwise orange house cat with thin black stripes. The Catillac Cats are a gang of alley cats run by Riff Raff. Together, they prowl the streets of Westfinster and get in trouble. (Though other than in the closing credits, Heathcliff and Riff Raff never actually meet...)
Advertisement:

This was a syndicated cartoon series of The '80s based on the Heathcliff comic strip. It ran in a two shorts format. Hilarity Ensues in every short.

The show is actually called simply Heathcliff. The expanded title is used probably to distinguish it from the previous (and lesser known) Ruby-Spears version from 1980. Additionally, "The Catillac Cats" (an original DIC Entertainment creation) are officially known as "Cats & Co." (They're referred to as such in the closing credits).