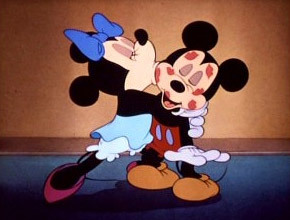 You know, Minnie, you might want to try a smudge-proof product.
"If we got a point for every time she kissed me in there..."
— Cody, Total Drama World Tour, "Super Happy Crazy Fun Time In Japan"
Advertisement:

The quickest way to show that a character has been the recent target of female affection (and a lot of it) is to show them with their face (and sometimes elsewhere on his body) covered in lipstick marks. Their hair and clothing may be disheveled as well.

It is most commonly the result of an extremely numinous Anywhere but Their Lips and Smooch of Victory, and is usually done by the character’s Love Interest. It can also be the result of a Forceful Kiss from an Abhorrent Admirer or Stalker with a Crush. Cuteness Proximity is another contributing factor, especially if the ones being kissed are children. On very rare occasions, a Projectile Kiss can do the job.

The kisser does not necessarily need to be shown wearing lipstick for this trope to work, as it is usually meant for exaggerated, comedic purposes. In some cases, though, a female character will be shown applying lipstick just before kissing the object of their desires. The color of the lipstick mark is mostly depicted as either red or pink, though there are instances when other colors are used.

While it is mostly used in animation, the trope has been occasionally imitated in live-action for exaggeration purposes. In Real Life, if a lipstick marks that easily, it's usually a sign of a poor(er) quality lipstick, because lipsticks with higher-quality ingredients typically don't leave marks (or at least doesn't mark nearly as easily).

The individual on the receiving end of this trope will usually respond with a Crush Blush or Post-Kiss Catatonia. That said, some characters, such as children and individuals who do not reciprocate the kisser’s feelings, will respond with disgust or simply wipe off the lipstick.

See also Lipstick Mark for when a character's romantic partner notices a mark that they did not leave, as proof of infidelity.

Not only did El Chu's love song won the heart of Rochelle, but she now loves him WAY too much.

Not only did El Chu's love song won the heart of Rochelle, but she now loves him WAY too much.