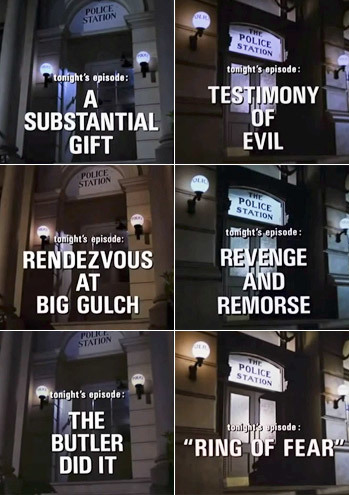 After the Title Sequence, but before the first act, many shows will put in an intertitle displaying the episode's title. For some shows, the title will be animated and a character from the series will read the title to the audience (mostly prevalent in anime, while western cartoons that use this are usually aimed at preschoolers). On the other hand, some shows might have the title be on-screen text displayed with the opening credits over the beginning of the first act. It is also common for the title to never be shown and the name of the episodes only found from episode guides.

These days, one tends to see episode titles only on non-primetime animated programming, although even then there are many exceptions to this. (For example, 4Kids' Saturday morning block didn't use episode titles on screen at all, regardless of whether the original versions of the shows had them.) Most other kinds of programming eschew from explicitly titling the episode on screen, with most exceptions being hourlong sci-fi (Heroes, Star Trek, Doctor Who) or (for some reason) the Aaron Sorkin dramas The West Wing, Studio 60 on the Sunset Strip, and The Newsroom.

The title card for an episode of Noonbory and the Super 7.

The title card for an episode of Noonbory and the Super 7.