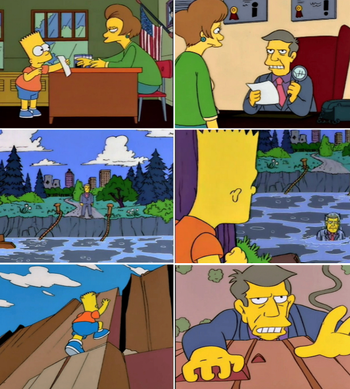 He will never stop, EVER, until Bart Simpson goes to class.
"According to my calculations, Mr. Spicoli, you wasted a total of eight hours of my time this year. And rest assured that is a kind estimate. Now, Mr. Spicoli, comes a rare moment for me. Now I have the unique pleasure of squaring our account. Tonight, you and I are going to talk in great detail about the Davis Agreement, all the associated treaties, and the American Revolution in particular. Now if you can just turn to Chapter 47 of Lord of Truth And Liberty."
— Mr. Hand, Fast Times at Ridgemont High (on prom night)
Advertisement:

A subtrope of Determinator, this is an educator (often a principal, though sometimes just a teacher; rarely, they're a professional truant officer) who, by all gods, swears that you WILL get an education, by all means necessary. This teacher will thus spend time hunting down students who try to skip school, to drag them back to class. If played with restraint, this means the principal spends his days patrolling the corridors of the school (rather than knee-deep in paper work and meetings as they would be in real life), maintaining a vigil for children roaming the halls without a hall pass, or worst, those that are late for class. The more serious examples of this trope will go on a quest when they learn that a student is not in class, tracking them across the city or even the country. They will brave the elements and the law, resorting to breaking and entering if they have to, all to make sure you go back to school. Often a Designated Antagonist (how dare they want to teach our kids!), which is usually justified by making the character a Jerkass into the bargain. May also be a Sadist Teacher who takes pleasure in the hunt and punishing his absconding students, although he's also likely to be just a Stern Teacher.

If the character in question is a principal, he may also be Dean Bitterman if he is doing out of a sense of authority or obsession with order - though not always, as sometime they may be doing it out genuine concern for their charges. Depending on how determined Non-Giving-Up School Guy is, he may prove to be a Badass Teacher with his determination to track his charge down.

More Fridge Logic occurs when one considers how apparently negative consequences for non-attendance only occur if Non-Giving-Up School Guy finds The Protagonist. Not actually showing up to class multiple times really results in F's, phone calls, letters to parents, etc. (Usually Handwaved by them being tricky enough to forge excuses, but in Real Life this can only go so far.) Or, for that matter, how "negative consequences for non-attendance" apparently don't apply to teachers and principals who abruptly abandon their duties to the school at large in favor of hunting down a single truant child. In Real Life, school authorities probably wouldn't take kindly to that.

This character may have/be the following: Heroic Spirit, Determinator and Implacable Man.