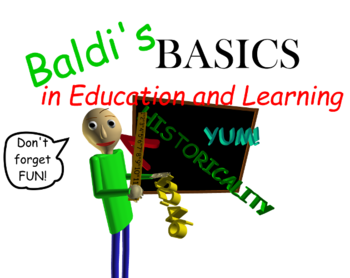 Education, learning, fun and unadulterated horror all in one!
Welcome to Baldi's Basics in Education and Learning! That's me!
— Baldi, upon starting the game.
Advertisement:

Baldi's Basics in Education and Learning (often shortened to Baldi's Basics) is an indie horror game that made its initial debut in 2018 as part of the annual itch.io Meta Game Jam contest. The original version made for the competition was hurriedly slapped together in a couple of days, and it shows. But despite this, the game exploded in popularity upon its release, won second place in the contest, and almost immediately gained a cult following for uniquely utilizing an intentionally terrible yet nostalgic theme lampooning low-budget ‘90s edutainment games as well as the general tropes of indie horror titles. After receiving a Colbert Bump from several famous Youtube Lets Players, it wasn’t long before fans of other cult indie horror titles latched onto the game as well, further skyrocketing its popularity to viral levels. In response, game creator Micah “Mystman12” McGonigal greatly expanded upon it with a content update.

The premise of the game is rather simple: the player is a student at Baldi's Schoolhouse, and their goal is to collect and fill out seven notebooks scattered about the campus (with each notebook containing 3 math problems). They need to collect these notebooks for their friend that left them in the school and cannot retrieve them himself due to "eating practice". The only problem is that a few questions are unsolvable Black Speech (like in real life), and Baldi gets so mad over failing students that he feels the need to hunt them down like the survival horror monster he really is with a ruler in hand with your butt's name on it. Meanwhile, there are other entities in the school that try to hinder your progress, such as a jump-roping girl, the school's principal, a giant talking broom, a bully, a sock-puppet, a hug-loving Cyborg on wheels, a cloud creature, a chalk drawing, a boy who loves bubblegum, a head in a shoe, and a creep in black. The game can be downloaded from here

to fund and create a full retail version of Baldi's Basics, which would tentatively include new features such as new characters and items, randomly generated levels with new rooms featuring new mechanics, random in-game events to change up the gameplay, and "field trip" bonus rounds to unlock buffs in the main game. A proof-of-concept demo of the camping bonus round can be found here

. The Kickstarter was successful, with a total of $61,375 raised for the project.

In April 2019, an update to the original game titled "Baldi's Basics: 1 Year Birthday Bash" was released. It adds some new elements to fit the birthday aesthetic, but more importantly adds a new ending. August 2019 saw the release of the full game's first demo, which includes one level and features many features that are planned to be included in the final game, with a second Kickstart backer-exclusive demo to come later on November 2nd, 2019. The public demo can be found here

Congraaatulations! You've read every last trope! Now all you need to do is GET OUT WHILE YOU STILL CAAAAAAN! Hahahaaaah!