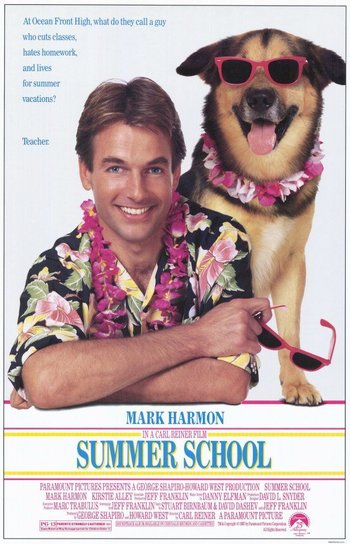 Summer School is a 1987 comedy film about, well, summer school.

The film stars Mark Harmon as Freddy Shoop, a slacker teacher prepared to spend his summer vacation in Hawaii... until the school administration forces him to teach a class in remedial English or lose his tenure. When Shoop discovers the students have no more interest in the class than he does, he strikes a bargain with them. Hilarity Ensues.

Better known now for its young cast, many of whom went on to bigger roles. The film was directed by Carl Reiner, written by Jeff Franklin (Full House), and features an original score by Danny Elfman.

Interestingly, this film was cited by a group of interviewees in the 2014 documentary Why Horror?, who credited their careers in makeup F/X to having been inspired by the gory prank Chainsaw and Dave pull on a substitute teacher.

Not to be mistaken for the indie anthology film of the same name.