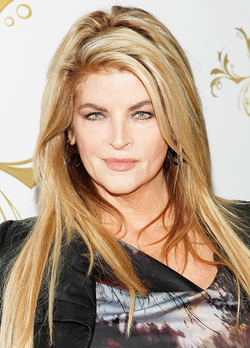 "You'll never be disappointed if you always keep an eye on uncharted territory, where you'll be challenged and growing and having fun."
Advertisement:

. Although she has a long list of acting credits, she is best known for her roles in Cheers, Veronica's Closet, Summer School, and Look Who's Talking, and her appearance on Dancing with the Stars. Her debut film role was as Lieutenant Saavik in Star Trek II: The Wrath of Khan. Her reality series Fat Actress ran for just seven episodes on Showtime.

Some tropes associated with Kirstie Alley include: