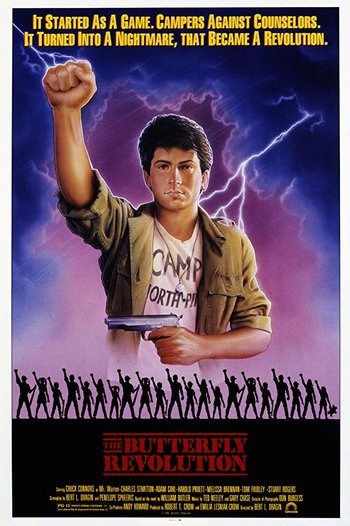 Summer Camp Nightmare is a 1987 horror film featuring Chuck Connors and Charlie Stratton, which is based on the 1961 novel The Butterfly Revolution by William Butler. In the film, the teenage counselors-in-training stage a takeover of the all-boys Camp North Pines to liberate it from its strict camp director Mr. Warren, locking up all the adult counselors and also liberating the nearby all-girls Camp South Pines. At first things start off fun as they celebrate the takeover with a co-ed dance. However, as a rape and a murder occur during the takeover, things take a turn for the worse, and one counselor-in-training must get the police to rescue the children from the camp and put the ringleader, Franklin Reilly, under arrest.