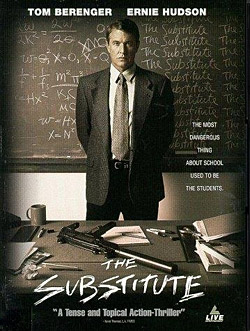 "I'm in charge of this class. I'm the warrior chief. I'm the merciless god of anything that stirs in my universe. FUCK with me, and you will suffer my wrath."
— Shale
Advertisement:

The Substitute is a 1996 action-crime-thriller film.

Tom Berenger stars as Jonathan Shale, a Mercenary who poses as a substitute teacher and goes undercover at his friend's school where she teaches after she is attacked by a gang.

Went on to spawn a series of sequels, with Treat Williams replacing Berenger as the titular substitute and fighting more gangsters, steroid-addled college athletes, and white supremacists, in that order.

Jonathan Shale vs. some of his students.

Jonathan Shale vs. some of his students.