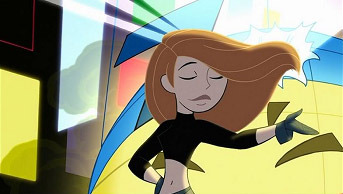 "I use my hair to express myself..."
"I like my hair
Really, it is pleasant to the touch
I toss my hair a bit too much."
— Leaf, The 25th Annual Putnam County Spelling Bee

Flipping your hair. This can vary from running your hand through your hair to brushing a few locks out of your eyes to giving your Rapunzel Hair a good toss, but it almost always conveys nearly the same things: confidence, arrogance, vanity. As such, it is a gesture most often employed by Bishounen, The Ojou or the Alpha Bitch, though kinder characters can also use it to merely accentuate their femininity or show that they're in a good mood. A bishounen's hair flip is usually accompanied with a large helping of Bishie Sparkle—females are also accompanied by Slow Motion. Another variation is when a woman tilts her head at 45 degrees and delivers eye contact in a come hither look.

Pretty much every time a woman with long hair takes off a Motorcycle helmet, especially if she's been assumed to be male until that point.

King Olly does a hair flip.

King Olly does a hair flip.