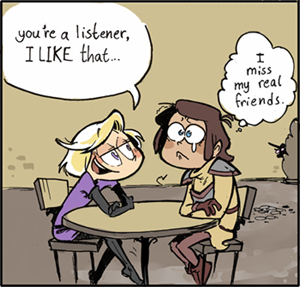 Oh Harv, that's the least of your problems.
Advertisement:

Warrior U is a humour/fantasy web comic set in medieval times by deviantart's hot-choc chronicling the adventures of its effeminate main character Finn; an author described "spoiled brat" who dreams of one day becoming a bard. Problem is, to qualify for this he must survive a semester of warrior classes at his local university: "Warrior U". Luckily for him, Finn is joined by his "best friend" Harv, the most promising student in the class, who he relies on for protection as well as company.

The series revolves around these two, as well as many other likable/terrifying characters, including Finn's glamorous evil sorceress mother Leenan, Harv's bratty and drooling little brothers, the teaching staff and other students at Warrior U, and a psychopathic Unicorn with a taste for homicide and a liking for Finn...

, or at the archive here