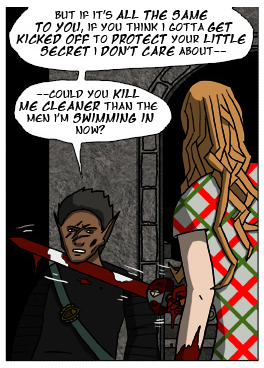 In retrospect, the jokes about turning her in for the reward money were a bad idea.
The Water Phoenix King

is a webcomic most simply described by its creator, Kyle Marquis (also the writer/artist of Broken Space

and designer of role-playing game Genius: The Transgression), as a mythic fantasy serial which updates every Monday, Wednesday and Friday, which is absolutely true.
Advertisement:

After that, it gets significantly more complicated to explain — but can equally truthfully be called an epic High Fantasy adventure about a Genre Savvy Teen Genius Magical Girl Warrior who is also rather an Anti-Hero and more than a little Ax-Crazy — her first exchange with her newly-revealed Spirit Advisor is a demand to assist her in Disposing of a Body not the one from her first Accidental Murder — but who doesn’t really want to be Evil (that business of summoning the Eldritch Abomination was a complete accident), her angst-ridden nerdy (yet Bishōnen!) Mentor Archetype guardian Fallen Angel who constantly protests his unheroic inadequacy before flinging himself into the fray, the traumatized former lawyer with the horrific scar currently working as a bartender/bouncer/janitor who’s just crawled back from the Despair Event Horizon after ten years in the wilderness considering his immortality a curse not a blessing to take up his gun in one of the strangest rookie-veteran team-ups ever, and the rest of the Ragtag Bunch of Misfits who either through fate or chance — if there is any difference in this universe — have all Met In An Inn which has turned out to be the Inn Between the Worlds and stayed there under the protection of the Goddess of the Crossroads to try to save their country, and ultimately their homeworld itself, from the impending Doom that has turned out to be the inevitable consequence of humanity overthrowing the titular God-Emperor in a war that ended up embroiling nearly everyone on — or off — the planet. (Turns out The King is the Land holds doubly true when “divine right” is literal.)

Got all that? Either you want to be reading it already, or you need more assurance. We haven’t even gotten to the zebra-riding samurai not-orcs, the dragonfly-riding insectile aliens, tortoise-riding traveling salesmen, the killer robots, the “war weasel,” the teenage aspiring-Templar nemesis with the BFS (mace, actually), the sword-vs-death-ray fights, or the cannibal demigods! Science Fiction or Fantasy? Don’t even go there, the answer is, "Both, of course!" The art is semi-realistic, a bit like early medieval miniature illustrations, densely detailed with rough but very expressive pen work and beautifully moody colors, and the story moves quickly.

As of September 14th, 2015, the comic is complete and can be read for free online at waterphoenixking.com