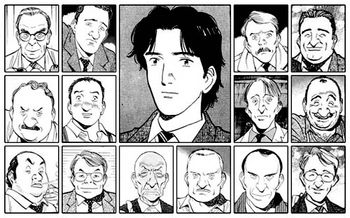 If you look hard enough, you might be able to see the Ninth Doctor in there.
"You all have such interesting faces..."
— Levi, Attack on Titan, about the Titans he is killing.
Advertisement:

Sometimes, an artist has decided to take the time to give even the most incidental of background characters each a unique face and appearance. Doing this is time-consuming and difficult, but man, does it make for Awesome Art. It also often requires the artist to kick Generic Cuteness in the face and throw it out the window — which, in turn, can make characters that are supposed to be attractive a whole lot more attractive by comparison to the other characters.

Please note that almost all the facial features of the characters are different. Slight changes in hairstyle, hair colour, eye shape, or eye colour do not count. The opposite of this trope is Only Six Faces, where even the main characters tend to look alike. In video games, there are usually only six background characters (You ALL Look Familiar). Sort of related to Taste the Rainbow, where a cast of characters may come in a huge number of permutations. Unrelated to Special Snowflake Syndrome and Sizable Snowflakes. Contrast with Flashy Protagonists, Bland Extras.