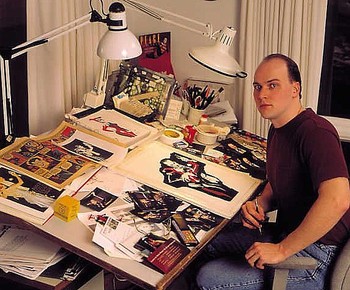 "There have always been naysayers. People who absolutely thought painting superheroes wasn't going to work. I had try to prove those people wrong."
— Ross, The Art of Painted Comics
Advertisement:

You remember those realistic-looking paintings of superheroes that made it plausible to imagine people running around wearing those costumes? They're probably the work of this guy.

Nelson Alexander "Alex" Ross (born January 22, 1970) is an American painter, character designer, and plotter who set the bar for painted comic book art. After discovering Spider-Man on an episode of The Electric Company, Ross became a huge fan of the superhero genre and attempted to emulate artists like John Romita Sr. and George Pérez when he decided to become an illustrator in the industry. Soon, however, he discovered the painted works of artists like Norman Rockwell and envisioned superheroes being drawn in the same style and quality. With this goal in mind, Ross graduated from the American Academy of Art in Chicago and pursued work in the comic book industry. He hit it big with his beautifully crafted recreations of iconic Marvel Comics moments and characters in Marvels. He continued his success over at DC with Kingdom Come and later with Justice. Ross is also in the creator-owned side of things with works like Uncle Sam and Astro City.

Due to the lengthy process of painting his art (he forgoes digital for more traditional methods), you'll seldom see him actually draw interiors. Nowadays, he's stuck with cover art (mainly at Marvel), character design, or whatever he feels like doing. Nobody's really complaining, though.

He's also fond of Reconstruction and Genre Throwback. He's not fond of The Dark Age of Comic Books. Or Wolverine (at least until Hugh Jackman came along).

Has no relation to the equally talented Bob Ross.