Comic Book / Days of Future Past 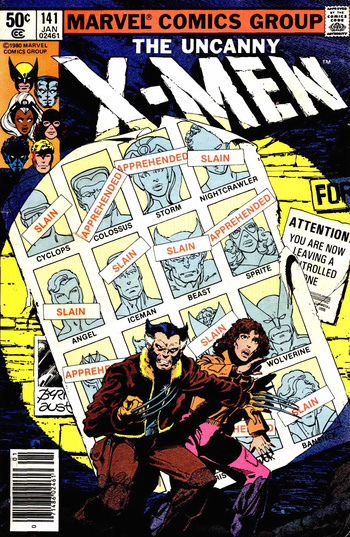 "Days of Future Past" is a 1981 X-Men storyline (published in Uncanny X-Men #141 and #142note Technically speaking, only the second issue was marketed as Uncanny, but the earlier issues are referred to that way to reduce confusion and ambiguity), written after the successful The Dark Phoenix Saga by Chris Claremont and John Byrne. This time-travel story was the first main story featuring Kitty Pryde.

The story, written in 1980 and first published in early 1981, was set in 2013. The United States is a dystopia, and people are divided into three groups: normal humans, normal humans with the potential to pass on the mutant gene, and mutants. The first ones are free, the second are forbidden to have children, and the third are either killed or held in concentration camps, with collars that turn off their powers. Everything is run by the Sentinels. And Europe has atomic bombs, ready to blast the US as soon as the Sentinels attempt to go outside America.

The group held in the concentration camp is composed of aged versions of the X-Men: Katherine Pryde-Rasputin (Sprite, later to be known as Shadowcat), Ororo Monroe (Storm), Peter Rasputin (Colossus), Franklin Richards (the son of the Fantastic Four's Reed and Susan Richards), Rachel (not given a surname here, but later revealed to be the daughter of Cyclops and Jean Grey) and Magneto (now in a wheelchair). With the help of Wolverine, still on the loose, they manage to send Katherine Pryde back in time to October 31, 1980, just before a pivotal presidential election, placing her adult mind in the body of her teenaged 1980 version. She tells the others that, on that day, the Brotherhood of Evil Mutants would kill the US senator Robert Kelly, along with Charles Xavier and Moira MacTaggert, which will lead to the anti-mutant hysteria.

Meanwhile, in the Future…, the X-Men escape from the concentration camp, but leave Magneto behind to cover their escape. Franklin dies during the next Sentinel attack. Ororo, Peter, and Logan sneak into the Sentinel headquarters, the Baxter Building (the former base of the FF), realizing too late that the Sentinels allowed them to do so to capture and kill them. Wolverine, Storm and Colossus die, while Rachel remains outside, protecting the unconscious Katherine Pryde.

In the present, the Brotherhood breaks into the Congress during a hearing on the "Mutant problem," but the X-Men turn up and fight it out, eventually defeating most of the Brotherhood, while Mystique escapes. Destiny, who left the fight earlier, attempts to kill Kelly, only for Pryde to save him at the last moment. Moments after she saves him, her adult mind returns to the future, restoring her teenaged identity.

Though not as successful as the aforementioned Dark Phoenix Saga, Days of Future Past is commonly ranked among the greatest X-Men arcs and rarely places very far from the former. In a title with as many Bad Future storylines as it has, DoFP was the first and original one, and has been copied and revisited many times since.

The seventh entry in the X-Men Film Series, X-Men: Days of Future Past, is based on this story; however, it was released in 2014, just missing the original story's bad future setting. However, the "Battle of the Atom" crossover was released in 2013 to coincide with the original setting, and involves time traveling mutants who seek to stop an apocalyptic future. Bryan Singer's first X-Men movie also uses elements of the story, borrowing the central plot about the X-Men trying to stop a Brotherhood plot against the Mutant-hating Senator Kelly.

Marvel officially revisited the story in 2015 under the title "Years of Future Past" as part of the Secret Wars (2015) storyline.