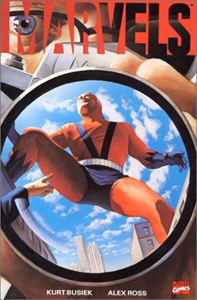 "As I have learned since, I was not the first anomaly to exist... but on that day of my freedom in 1939, this world had its first confrontation with the fantastic. The Golden Age of miracles would begin, and in the years to come, the world would know the presence of the unnatural and extraordinary as part of reality."
— The Human Torch, Marvels #0
Advertisement:

Marvels is a 4-issue mini-series, running from January to April, 1994. An exploration of the history of the Marvel Universe from the perspective of an Everyman, written by Kurt Busiek and beautifully illustrated by Alex Ross.

It's 1939 and Phil Sheldon is a young freelance photojournalist. He's interested in going over to Europe, where he knows trouble is brewing, and he has a young fiance, Doris. This all changes, however, when he's at the press conference where Phineas Horton announces his newest creation — the android known as the Human Torch. Soon, other "marvels" appear, the Sub-Mariner and Captain America among them, and Phil can only watch on the sidelines, both awed and fearful. He hopes that they will leave, that this will all pass... but he knows better.

Soon, it's the 1960s and Phil Sheldon has two daughters and a thriving career. With the Fantastic Four and the Avengers dominating the headlines, this seems to be an era of prosperity, where superheroes are the new celebrities. But even now, there's a dark side: mutants, homo superior. Even Phil seems afraid of them, but soon comes to realize his own prejudices when he finds his daughters have helped and hidden a little mutant girl from an angry mob. Soon, the public even turns against the other superheroes. Even after the FF save the world from Galactus, the public seems to both love and hate the heroes.

Even after Phil's book Marvels comes out, he can't help seeing the story in the public's reaction. In his efforts to write another book and clear Spider-Man's name of Captain Stacy's murder, he meets and interviews Gwen Stacy. But what happens when superheroes fail? Where do you go when you start being within the story instead of outside?

Marvels was published in 1994. Soon afterwards, several followups with a roughly similar format came out:

Busiek would explore similar themes in Astro City, which started in 1995. The direct sequel to Marvels, Marvels: Eye of the Camera, also written by Busiek, came out as a six issue series from 2008 to 2010. And in 2020, Busiek curated a series of one-shots by different writers and artists called Marvels Snapshots. Also in 2019, Marvel and the podcast company Stitcher adapted Marvels into a podcast, which both adapts the 1960s chapters of the comic (centering the story around the Galactus incident) and continues the story. The podcast also expands the roles of previously minor characters Ben Urich and Marcia Hardesty. promoting them to lead characters alongside Phil Sheldon.

Phil Sheldon himself has made cameo appearances in The Super Hero Squad Show, Marvel's Avengers and Kingdom Come.