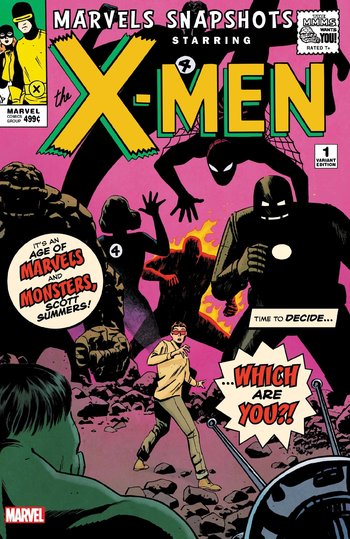 Marvels Snapshots is a series of one-shots released in 2020 and 2021 exploring the early days of the Marvel Universe through the viewpoint of non-superheroes. Each issue is curated by Kurt Busiek, but written and illustrated by someone else. The stories themselves serves as a Spiritual Successor to Marvels, which was about the emergence of superheroes in the Marvel Universe through the lens of a photojournalist — Marvels Snapshots, on the other hand, takes a look at superheroes through many different lenses.

The issues so far:

After the end of the Second World War, Betty Dean decides to take her boyfriend, Namor the Sub-Mariner, to Coney Island to relax. However, the scars of the war and what happened to Namor run deep, deeper than anyone expects.

Dorrie Evans was once the girlfriend of Johnny Storm, the Human Torch, back when he still lived in Glenville, Long Island, before he was famous. Now, it's his ten year high school reunion and everybody is waiting to see him return, but memories run deep.

Felix Waterhouse was a young kid from the Bronx when the Madbomb went off and the world went crazy. Afterwards, determined to find a way out from the poverty that's trapped his family, he finds himself in the recruiting sights of A.I.M.

Scott Summers was just a teenager with brain damage in an Omaha state home when he sees the emergence of superheroes and finds a new world...and a new way to figure out his place in the world.

Victor "Dutch" Hollander is a former small-time thief who just wants to get out of the criminal business and start a new life fresh and clean. However, when he's roped into one last crime, he might be in over his head...