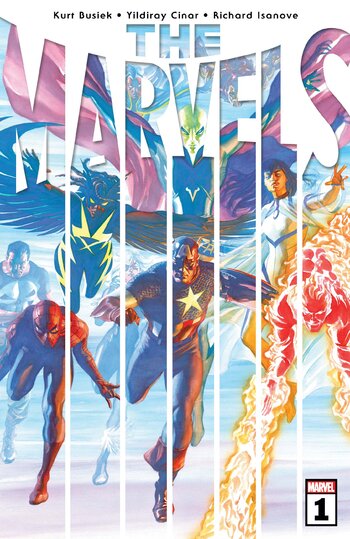 Anyone. Anywhere. Any Time.
THE MARVELS isn't a team. It's a concept, a universe, a sprawling world of opportunity.
— Kurt Busiek
Advertisement:

The Marvels is a 2021 Marvel comic book written by Kurt Busiek, with art by Yildray Cinar and Richard Isanove. Per Busiek, it's meant to tell stories that involve the Loads and Loads of Characters from around the Marvel Universe, without the book becoming a Crisis Crossover. "From before the Big Bang to beyond the End of Time. From the Avengers to the X-Men, from Aarkus to Zzzax, from the Kree Empire to the Dark Dimension and into the unknown it ranges, vast and deep. And there have been adventures too big for any one series. Until now."

The first story arc involves the history of Siancong, a former province of French Indochina, as it goes through the decades and involves Captain America and the All-Winners Squad, Reed Richards and Ben Grimm during their time in military intelligence, Eugene "Flash" Thompson during his army days, Spider-Man, the Punisher, the Human Torch, Storm, Aero, Iron Man, the Golden Age Vision, and cosmic beings from beyond space time. It also features brand-new characters like Kevin Schumer and the mysterious "Threadneedle."

From the Golden Age to the Modern Age, now is the time of the Marvels.

Not to be confused with the upcoming Marvel Cinematic Universe film of the same name, which is a sequel to Captain Marvel.

Tropes included in The Marvels: