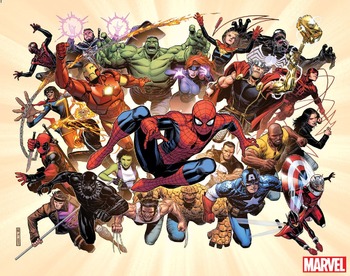 Marvel: A Fresh Start is the 2018 relaunch of Marvel Comics, succeeding Marvel Legacy.

The first Marvel relaunch spearheaded by editor-in-chief C.B. Cebulski since he took over the position in 2017, Fresh Start sees various changes to many of its titles following the departure of former EiC Axel Alonso, and longtime exclusive writer Brian Michael Bendis.

As the title would suggest, Fresh Start is intended to be a new starting point for many fans of both old readers and newcomers, and was done to make the line more in-tune with what their readers wanted, as opposed to previous attempts to broaden their appeal to wider audiences with mixed results. The relaunch sees many changes via returning to old status quos that previous relaunches shook up, creators leaving titles after long runs (Dan Slott leaving Spider-Man after a decade, Gerry Duggan leaving Deadpool after six years) in favor of being moved to new titles, and an increase in Marvel Digital Originals. The line also sees the Fantastic Four make their grand return, after having their series canceled in 2015.

One of the most notable initiatives of the relaunch is the promotion of X-Men as an A-list property once again. To do this, famed Fantastic Four, Avengers and Secret Wars writer Jonathan Hickman made a return to Marvel after a long period of only working on creator-owned comics, with all ongoing X-titles being canceled in favor of Hickman's reboot, which will both change the X-Men forever, and provide a new launch point for future stories. This is such a big move, in fact, that the X-books themselves saw an official relaunch with Dawn of X to signify this.

After spending several years in what some called a creative decline, Fresh Start was a success, akin to DC Rebirth. Tellingly, the relaunch continued into 2019 with no signs of slowing down, instead focusing on establishing a proper status quo instead of yet another relaunch.

open/close all folders
General Developments
Ongoing Comics
The following titles will launch or continue during this phase. Bolded titles are ongoing.

The Defenders (all books are Marvel Digital Originals)

Asianote New heroes made primarily for the Asian market, however, they are still canonically part of the Marvel Universe and published in the west

TBA (To Be Determined)note Due to the COVID-19 Pandemic, these comics were delayed and have yet to be solicited.