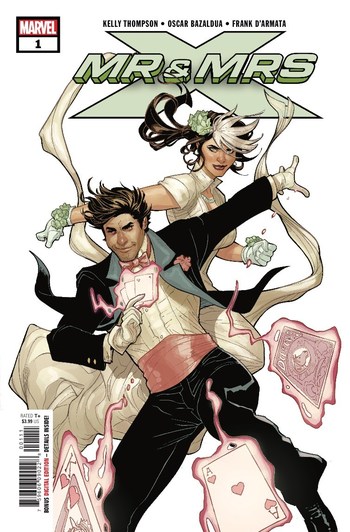 The bride and groom.
Advertisement:

Rogue and Gambit have finally tied the knot and gotten married (even if it was originally supposed to be Kitty Pryde and Piotr Rasputin's wedding). They exchanged the vows and said, "I do." So what comes next? The honeymoon, of course. And Gambit has made sure that they honeymoon in a place where nobody can bother them: space!

Except, well, this is the X-Men and sometimes the X-Men need to go into space. When Kitty needs someone to go on a mission to Shi'ar space and retrieve a valuable object, she has to recruit the honeymooners on their spaceship since they are the closest ones. She just didn't tell them that they would be facing against the Shi'ar Imperial Guard. Or that Deadpool had stowed away.

A 2018 comic book written by Kelly Thompson, with art by Oscar Bazaldua, Mr. and Mrs. X was first advertised as CLASSIFIED before the reveal that it was about the newly married Rogue and Gambit in the wake of X-Men: Gold #30.