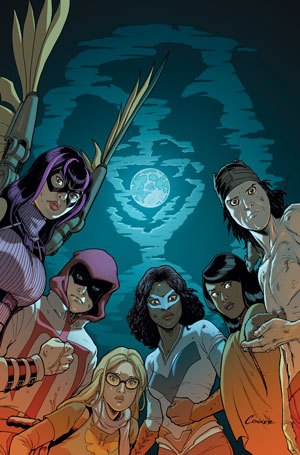 We are faceless. We are limitless. We see all. And we do not forgive.note From left to right: Katharsis, Burden, Vengeance Moth, Virtue, Tremor, and Mouse
Advertisement:

The Movement is a series from DC Comics which started in May 2013 as part of the New 52, with scripts by Gail Simone and art by Freddie E Williams II.

Set in Coral City, The Movement centers around a group of superpowered teens who take matters of justice into their own hands after the corrupt local police department is exposed. But how will the rest of the world react to these teens? And with so much power at their disposal, can they really be trusted to work towards a greater good?

There are a couple of cops in Coral City who are trying to genuinely do good, but it's an uphill battle for them.

Because of low sales, the series was cancelled at issue 12. Gail Simone has said that DC Comics has shown nothing but support for the book and knew it was a risky book to sell.

The Movement contains examples of: