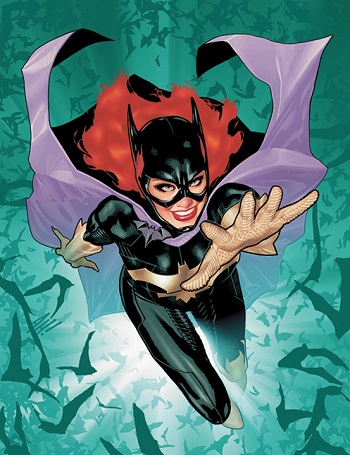 No school like the old school
They use a lot of different words to describe me. Intense. Driven. Exceptional. But I know what they really mean. They mean I'm weird. Dad worries about me, since Mom left. We filled that gap, somehow. Me, my Dad, and my brother, James, Jr. Our weird little family, and the odd little obsession we share, like twisted moths. We can't stay away from the darkness.
Advertisement:

Batgirl was an ongoing monthly comic book series published by DC Comics beginning in September 2011 featuring Barbara Gordon as Batgirl, a masked crimefighter operating in Gotham City. The series was initially written by Gail Simone and drawn by Ardian Syaf.

Barbara Gordon was the best known and first 'official' bearer of the Batgirl title (after Betty Kane) when the character was introduced in 1966. However, she retired from the position and was later crippled by The Joker in the 1988 Alan Moore story The Killing Joke. The title was passed on to several other women, some with Barbara's approval and some without, while she reinvented herself as the tech-savvy Oracle. Oracle served as an information broker and hacker for the various heroes of the DCU, she was reintroduced in the Suicide Squad and eventually starred in Birds of Prey, an ongoing series created by Chuck Dixon and eventually written by Gail Simone that continued in two volumes until the New 52 relaunch of the DC line in September, 2011. After the relaunch Barbara Gordon regained the use of her legs and reclaimed the Batgirl title.

The Batgirl series opens with Barbara already re-active as Batgirl, having recovered from her paralysis, though the initial issue does not explain the circumstances of her recuperation. The timeline has been compressed so that only three years have passed since she was shot by the Joker, and she is still getting used to having full mobility again and facing villains directly. Her first supervillain foe, calling himself "Mirror," is killing people who survived fatal situations, and includes Barbara Gordon herself as a target.

In October 2014, Gail Simone left the book and a new creative consisting of writers Cameron Stewart, Brendan Fletcher, and artist Babs Tarr take over the book. Now called Batgirl of Burnside the trio gives the series a brighter focus with a new costume for Barbara to go with the shift in tone.

As part of DC's Rebirth initiative, the series received a sequel in 2016, also titled Batgirl but known unofficially as Batgirl (Rebirth).