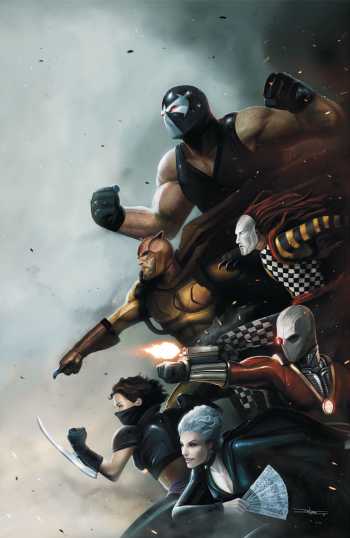 A team of supervillains in The DCU, there have been several incarnations of the Secret Six, with the current team created by Gail Simone and Dale Eaglesham. This incarnation is made up primarily of villains who are cooperating for personal and commercial reasons, working as a team to commit crimes and perform services for an exorbitant fee.
Advertisement:

This version of the Six first turned up in Villains United #1 (July, 2005), fighting against the Society of Supervillains. After all, just because they are all evil does not mean they get along. They had a mini-series (Six Degrees of Devastation) before finally getting their own monthly title. The series was cancelled

as a part of the New 52 relaunch and replaced by a reboot of the Suicide Squad featuring a few key members, such as Deadshot and King Shark, and Tremor reappears in Simone's new comic The Movement.

Ragdoll appeared in Gail Simone's Batgirl comic, along with a nod towards Scandal, Knockout, and Liana Kerzner.

A new Secret Six volume launched in December 2014, with Simone as author, Ken Lashley on artwork and covers by Dale Eaglesham. Catman and Black Alice returned from the previous run. New members to the team are pre-established characters Strix and Shauna Belzer, the new Ventriloquist, and brand new characters Porcelain and Big Shot. More information here

In October 2018, it was announced that a television series based on the team was in development at CBS, but it's not clear which run the show would pull from, or which characters would be featured.

Do not mumble when ordering at your local Comic Guy, lest he might confuse it with Dynamite's "Sacred Six". See also Sinister Six, which are from the rival company and made mostly to counter Spider-Man.

open/close all folders
Volumes 2 and 3

This second volume provides examples of:

This third volume provides examples of: