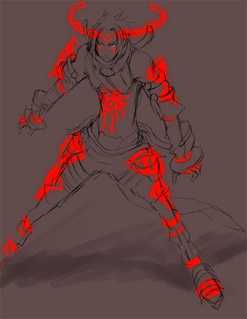 Those glowing lines mean that someone is about to die very soon.
Advertisement:

A classic shorthand for indicating that somebody has activated their Super Mode, tapped into their True Potential, or otherwise just got a lot more powerful: Basically, a badass-looking pattern appears on their skin, often glowing. Is related to Glowing Eyes of Doom, and the two are often seen together. This is not necessarily an indication of heroism or villainy. The trope has appearances about even on either side. Sometimes, it's a case of a character being pushed too far.

The tattoos will usually just be either a nifty/badass black pattern or a glowing red one. Can overlap with Tron Lines and Instant Runes. Compare and contrast with Mark of the Beast, for when the patterns forming are an indication of evil and Power Tattoo, the more compact version. Compare Power-up Full Color Change.

Anyone affected by his power gains white lips.

Anyone affected by his power gains white lips.