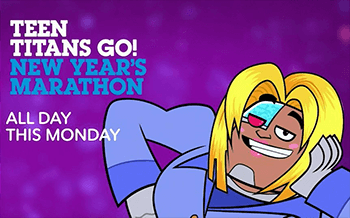 This is an event where a network will run multiple episodes of the same show back-to-back for an extended period of time. It can also take the form of running all of the movies in a given franchise back-to-back.

Often done as a promotional event. A popular series will marathon all previous episodes prior to the start of the newest season. The release of a new film in a franchise will be preceded by a marathon showing of all previous films in that franchise. In addition to providing publicity, this gives the audience a chance to get up to speed with events in the show before they jump into the new season. Sometimes, it's also done with really, really popular shows to crank up the overall ratings.

Since the mid-2010s, this practice has become a lot more common as cable networks try to cater to the concept "binge viewing"; the idea of being able to have your own marathon using video-on-demand services such as Hulu and Netflix.

Sometimes overlaps with Adored by the Network. Not to be confused with actually running a marathon.