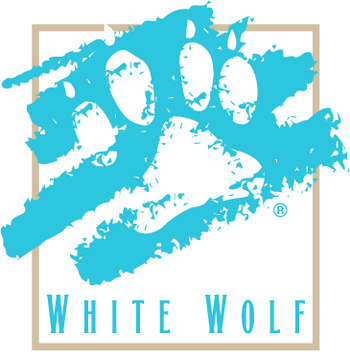 White Wolf, Inc., is an American gaming company, begun in 1991 with the merging of Lion Rampant (creators of Ars Magica) and White Wolf Magazine. It publishes a line of several different but overlapping urban gothic role-playing games, set in a "World of Darkness." These games take place in the modern world, but with supernatural elements. Unless by explicit Storyteller explanation, all things in the modern world remain the same. Places, technologies, laws, medicine, police procedures etc. will be as they are in the normal world. However, the "gothic" aspect means that the world is an unpleasant place indeed. Normal humans see everything like they normally would, but the supernaturals see a dark underlying evil which gives the game its gothic feel. In the World of Darkness, vampires, werewolves, mummies, mages, changelings, wraiths, and other creatures of the night exist and fight with and alongside each other while remaining hidden from normal humans.
Advertisement:

The company also publishes the high fantasy Exalted and the modern mythic Scion. During Third Edition Dungeons & Dragons, they put out d20 system material under their Sword & Sorcery imprint, including such titles as the gothic horror campaign setting Ravenloft and Monte Cook's Arcana Unearthed series. They also had a division, Black Dog Game Factory, that published books that deal with mature and adult themes, including several volumes from the Old World of Darkness line and the parody RPG HoL.

White Wolf has a mixed record in the collectible card game market with Arcadia, Rage, and Vampire: The Eternal Struggle (formerly Jyhad). V:TES, perhaps the most successful of the bunch, was originally published by Wizards of the Coast in 1994 but was abandoned just two years later after a revamped base set and name change (V:TES) and three expansions. White Wolf acquired the rights to the game in 2000, despite no new material having been produced for the game in over 4 years. Since then, V:TES has released several expansions, and was for a long time the only official source for material for the Old World of Darkness.

In 2003, the company announced the "Time of Judgment," which brought an end to their series of Old World of Darkness gamelines. They then launched a Spiritual Successor setting, putting out games set in a New World of Darkness, independent of the original. This move concerned many fans who had become used to the existing setting.

In 2006, White Wolf was acquired by CCP hf, the creators and publishers of EVE Online.

In 2011, White Wolf announced a 20th anniversary edition of Vampire: The Masquerade, and started making Old World of Darkness gamebooks available via print on demand. At that year's Gen Con, they announced they would now be releasing new books for both old and new Worlds of Darkness with the Onyx Path imprint. In late 2011 they began development of the 20th anniversary edition of Werewolf: The Apocalypse.

In 2012, Rich Thomas, White Wolf's creative director, founded Onyx Path Publishing, which had licensed the old World of Darkness, the new World of Darkness, and Exalted from WW/CCP, bought Scion and Trinity Universe from them outright, and was planning to publish their own games.

In October 2015 it was announced that Paradox Interactive had bought the company from CCP, complete with all the games they owned (ie, the Worlds of Darkness and Exalted). In November 2018, following backlash concerning the Anarch and Camarilla sourcebooks in Vampire: The Masquerade 5th Edition, it was announced that White Wolf was fully absorbed into Paradox and would no longer function as a separate entity, ceasing internal development and publishing.

The Chronicles of Darkness tabletop gamelines (2004 - )

Published under the Sword and Sorcery Studios imprint: