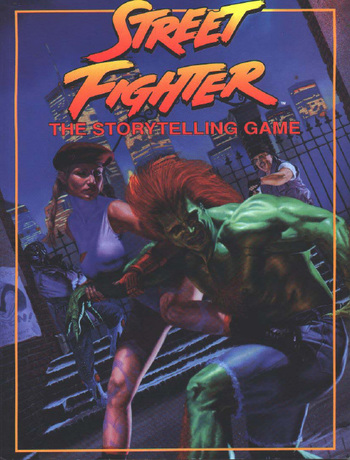 An unusual combo to say the least.
Advertisement:

In a very unlikely turn of events, White Wolf approached Capcom about doing a licensed tie-in to Street Fighter with their trademark Storyteller system. Capcom agreed, and thus one of the most unusual game transitions in the world occurred.

Street Fighter: The Storytelling Game was created around the time of Street Fighter II: Turbo in 1994 so the game has a large amount of Continuity Drift due to many facts not yet having been established about characters and their works. This includes a number of Woolseyisms and odd factoids about their characters. The game, ironically, predicted how the franchise would eventually evolve with a focus on espionage and crime-fighting against Shadow Law (called "Shadoloo" here) with a more over-the-top and crazy world. It was a financial failure but remains a Cult Classic despite the difficulty of getting copies of the books.

The game line consisted of only six supplements: