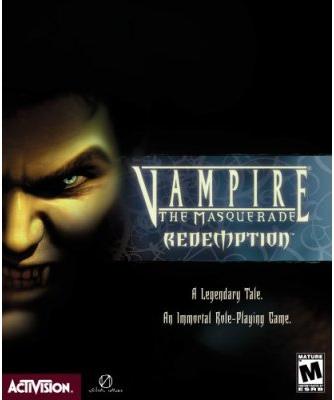 Vampire: The Masquerade – Redemption is a PC role-playing game developed by Nihilistic Software, published by Activision, and released on June 7, 2000. The game follows the adventures of a French crusader, Christof Romuald, through Prague and Vienna in the Dark Ages and modern-day London and New York City. The game is based on the pen-and-paper roleplaying game Vampire: The Masquerade.
Advertisement:

In short, you are a crusader who finds himself resting in Prague after taking an arrow to the gut in battle against the pagan barbarian hordes. As you heal, you become friendly with Anezka, the nun who helped you recover, and take it upon yourself to protect her and her convent from the creatures of the night that threaten it. Vampires and monsters of misshapen flesh walk the streets at night in Prague, but you are confident that with your trusty sword and faith in God, you can overcome any enemy.

It doesn't last, and Christof finds himself transformed into a vampire of Clan Brujah instead, and drawn into the murky world of vampire politics and war.

The game's whole story, crossing most of Europe and 800 years of history, culminates in an epic battle to prevent an apocalypse on January 1st, 2000, ultimately turns on Christof and the three things which drive him: his love for Anezka, his despair and rage over his condition, and his faith.

Can be bought from Good Old Games

When Christof accuses a mugger of being "A common cutpurse" the man's reply is a baffled "What?"