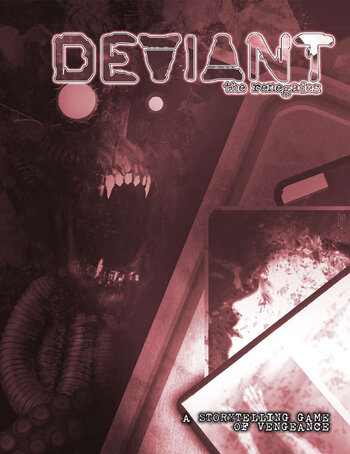 A Storytelling Game of Vengeance.

Deviant: The Renegades is the eleventh game in the Chronicles of Darkness, and the second to be released since the name change from "New World of Darkness". You play a Deviant, somebody who had something... wrong done to them. Whether at the hands of scientists with an eye towards profit margins over humanity, a secret project seeking to make the perfect weapon out of imperfect flesh, or a group of mad cultists who wanted to strap you to an altar and invite interesting and horrifying occult forces into you, you were changed, made less yourself and more their toy. It broke you so badly you no longer quite know what makes you you anymore.

Then you got away. The people who changed you didn't exactly like that; they're still out there, and they're looking for you. But you've got the power in you now. They wanted to make you a weapon. Show them just how much damage you can do.

Terminology: The Remade (or Broken) are those changed, made less human through horrid means by a Progenitor, a mortal who wanted to harness the hidden forces of the world for themselves, but didn't necessarily care about the human cost. Though not all Progenitors are evil (and some are, in fact, the Deviants themselves), many work for Conspiracies who want to control the Remade and the manifestation of Deviants invariably interests those groups who wish to have their power for themselves. The Renegades are those who fight back against the Conspiracies for revenge or to retain their freedom, while the Devoted are those who have chosen to side with them.

Each Remade has an Origin that traces the path that led them to becoming a Deviant, be it volunteering (Epimorphs, the Volunteers), being born that way, whether through inheritance or modification (Genotypal, the Born), intentionally choosing to be changed (Autourgics, the Elect), falling victim to a Freak Lab Accident (Pathological, the Accidents), or getting snatched off the street to have something shoved into you (Exomorphs, the Unwilling). Such experimentation places them within a Clade, which roughly defines what the resulting change was, be it developing Psychic Powers (Cephalists, the Psychics), becoming a Half-Human Hybrid (Chimerics, the Hybrids), being bound to something intangible (Coactives, the Infused), having inanimate objects incorporated into your body, as with cyborgs (Invasives, the Cyborgs), or experiencing a biological reaction to a supernatural stimulus (Mutants, the Grotesques). Those changed gain Variations, powers that arose as a result of their experimentation; the power of said Variations is tied to Scars, the ways in which their transformation screws them up. Beyond that, Deviant is supposed to be an extremely customizable game, with Forms that alter both the manifestation of powers and the overall power level.

Conspiracies are hardly going to take their potential assets going rogue lying down however; most utilize strange powers and devices called Icons that give them preternatural and supernatural abilities, and many have learned to create Manticores, nonsapient animals put through the Remade process and used as more disposable muscle (though some Deviants have won Manticores over to them). Most common, and worst of all, however, is the informal set of alliances and dealings between conspiracies willing to create Deviants, known to Renegades as the Web of Pain. Even if a conspiracy has no ability to, for example, interface with the government, it's more than possible for them to call a favor from someone who can, or even for an unrelated conspiracy to hear about a potential asset through the grapevine and try to win them over.