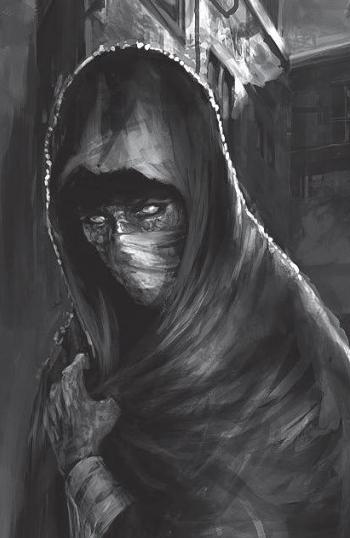 See how good you look after several millennia.
Advertisement:

Mummy: The Curse, released in 2013, is the eighth gameline released for the Chronicles of Darkness, the fourth to be released after White Wolf merged with CCP, and the first to be released by Onyx Path. In making it, they took the hopefulness of Mummy: The Resurrection, their previous mummy game, and twisted it upside down.

In the beginning there was the city of Irem, heart of a powerful Nameless Empire, based where the Egypt of the Pharaohs would one day arise — an empire far more mystically advanced than any of the time. You and a select group of people were subject to the greatest feat of magic that has ever been attempted by mortal hands, the Rite of Return. Now, as an Arisen, you walk the line between life and death, which is both a blessing and a curse. On one hand, you have life everlasting. It takes nothing short of a nuclear bomb to destroy you. On the other, you're able to rise only for short periods, your power steadily ebbing away each time. Your friends and family are long since dead and gone, even fading from your memory as the centuries pass.

Your "true" body remains as it was when you underwent the Rite, a preserved corpse, but it's an easy thing for you to adopt a more human guise, shaped by your memory of yourself — for better and worse.

The initial plan for Mummy was to do the corebook and three supplements — Guildhalls of the Deathless, Book of the Deceived and Sothis Ascends. A Kickstarter for a deluxe version of the core added citybooks Cursed Necropolis: DC and Cursed Necropolis: Rio, propbook Dreams of Avarice, a Ready-Made PCs PDF, a fiction anthology and a novel. The free supplement Lore of the Deceived added some bonus material on the Lost Guild. A Second Edition was announced to be in development in 2019.

Terminology: as part of the Rite of Return, each mummy made a decree, determining which part of their fivefold soul they were most deeply attuned to — ab (heart), ba (spirit), ka (essence), ren (name), or sheut (shadow). The judges, 42 in total, are the entities mummies make their decree before during the Rite of Return, and help shape their nature as Arisen. The guilds are the Arisen's social groups, originating in Irem, devoted to the learning of magic. Cults are mortal organizations which support and assist mummies on their journey through eternity. Utterances are the dark miracles of the Arisen, glorious and terrible magics. Affinities are mummies' innate powers, apparently built into the Rite of Return, which manifest as and when needed — even if the mummy in question wasn't aware of them beforehand.