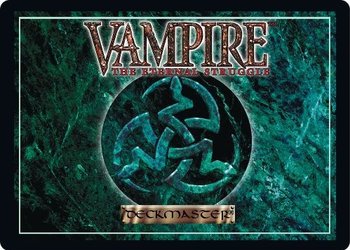 Vampire: The Eternal Struggle — originally known as Jyhad, but changed to distance the game from the Islamic term "Jihad" — is a Collectible Card Game initially published by Wizards of the Coast and designed by Richard Garfield of Magic: The Gathering fame, released in 1994. Based on Vampire: The Masquerade, players assume the roles of Methuselahs, powerful vampires who are thousands of years old; while not being able to get involved personally, they direct their unwitting vampire minions to get rid of the other players by destroying their influence by "bleeding" the methuselah's "pool".

White Wolf took over the development of the game in 2000 after it was dropped by Wizards. Notably, after the Time of Judgement had passed and wiped out the rest of the Old World of Darkness in 2004, the game continued and was the only product of the old World still ongoing; the game was eventually transferred to CCP and finally ended in September 2010. Despite this, the game continues to be played and maintains a strong following, with official new card sets being created by the Elder Kindred Network

, when Black Chantry Productions licensed the game from Paradox and brought the game back into print with four new Starter Decks.