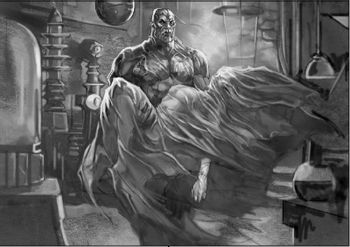 Death did they part. They were reassembled.
We know we're not real. It's like playing house, like befriending shadow puppets. It becomes frustrating, then maddening. No one wants the company of monsters, not for long.
Not even other monsters.
Advertisement:

The fourth game in the Chronicles of Darkness setting, released in 2006, and the first of its 'limited cycle' games, which had a set number of sourcebooks. Promethean had the core book and four Sourcebook follow-ups, Pandora's Book, Strange Alchemies, Magnum Opus and Saturnine Night, with a Ready-Made PCs PDF supplement added later. An updated second edition was released in 2016 that shuffled around some of the Lineages and Refinements, clarified rules, and made the game more playable for a wider audience.

The name of Promethean refers to its central characters, reanimated corpses fueled by "the Divine Fire", "Azoth" in alchemic terms; the Divine Fire is often affiliated with the fire Prometheus stole from the gods, dubbing all who are fueled by it Prometheans. These creatures are cursed to suffer the unending hatred of the human race, and must struggle for survival against both mankind's rejection and the rejection of the earth itself. What's worse, Prometheans are also hunted - Pandorans, creatures born from Promethean creation rites gone wrong, desire to devour the Created.

Despite the description, this game is actually optimistic. Prometheans follow what they call "the Pilgrimage", a quest to refine themselves into something more closely resembling humans. They learn to master the Azoth within them and the nature of humanity, with the goal of someday completing "the Great Work": redemption, the final transformation into human beings.

Assuming, of course, they can avoid giving up in the face of the world's spite and taking up the Refinement of Flux.

Notable perhaps because a viable group of characters in the game consists of Frankenstein's Monster, a marble statue imbued with life, a hypertech nanite colony in the shape of a man, a mummy, and a golem complete with the name of God on his forehead, and they can go beat up a radioactive zombie-making (and also radioactive-zombie making) thing brought to life by a nuclear bomb and guarded by living cancers, because you were told to by a blood-drenched angel with a flaming sword and six wings. And despite that description, it's actually a rather deep game of personal horror and on the nature of what makes a man. Possibly the strangest of the Chronicles of Darkness games, Promethean requires more investment between Storyteller and player than the norm, and is thus recommended for smaller groups.

The various Splats of Promethean are as follows:

The Lineages: The inborn classification of the Created, representing the way in which the Promethean was… well, created. Each Lineage is also associated with one of the medieval Elements and an associated bodily Humour.

The Refinements: The chosen Splats of the Prometheans. Unlike other species in the World of Darkness, Refinements aren’t social constructs so much as philosophies. There are so few Created in the world that a given Promethean may live out his entire pseudo-life without ever meeting another of his kind, let alone one following the same Refinement. Refinements are divided into simple and complex; a Promethean must always start their journey on a simple Refinement, and cannot have completed more complex Refinements than simple ones.

The five simple Refinements that are common among the Created:

The Five Complex Refinements that can be taken later in a Created's journey are:

There is one final Refinement, one that is seen as a path of denial or failure.

Terminology: Prometheans each belong to a Lineage descended from a Progenitor created by a human Demiurge. The five in the first edition core claim descent from Frankenstein's Monster, Galatea, Osiris, Tammuz and Ulgan, but more exist; the Zeka are radioactive, the Unfleshed are made from robots and machines rather than human corpses, and there are other, rarer ones which can be created by freak occurrences. They travel in groups called throngs. They follow one of ten Refinements to focus their Pilgrimages. Their powers are alchemical Transmutations fueled by their internal store of Pyros; Pyros in turn is empowered by their Azoth. Their Karma Meter is Humanity, their ability to comprehend and mimic human behavior and morals. All Prometheans follow a Pilgrimage to find humanity, without clear direction; if they find their way successfully, they may achieve their Great Work, or Magnum Opus, and become fully human.