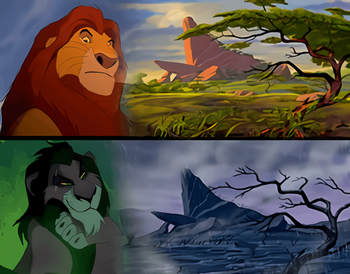 As within, so without. Light begets plenty, darkness begets famine.
Verence I: Remember, good sisters, the land and the king are one.
Nanny Ogg: One what?
— Wyrd Sisters
Advertisement:

A house says a lot about the people living in it: their social and economic status, their religion and culture, their cleanliness. The same can be said about a king and his kingdom. You're unlikely to find Moloch the Despoiler ruling Hippity Hoppity Happy Hare Hill, and a place like the Firepits of Wrath is most certainly not going to be ruled by the iron-fisted Tooth Fairy (unless, of course, he's that Tooth Fairy)...though the Orcs would have had much better dental hygiene.

The land of the Fisher King not only reflects the kind of rule they impose, but their moral alignment, state of health, and in some cases even their mood. ("The Land and the King are One.") In this kingdom the "Divine Right of Kings" extends to a righteous link with the land. This is either a blessing or a curse, because though their joy brings eternal spring and bounty, their sadness and anger heralds rain and thunderstorms respectively. If the king is dying or goes mad, expect the kingdom to become sickly and its inhabitants unhinged. If he's replaced by a villain, they either "inherit" the link or the kingdom itself resents this affront to the natural order and becomes a truly depressing Mordor-like place to live (or even wintry). It is much more justifiable in-universe when the rulers are supernatural in any way. At other times it is just Rule of Drama and Empathic Environment having their hand in that. A more mundane explanation that could apply for everything but the weather, is that a good and respectful ruler cares about the well-being of his land and his subjects and invests time and effort to make his kingdom as pleasant as possible for as many as possible, while a selfish and uncaring one will only care for his own prosperity at everyone else's misery.

The replacement of the Big Bad on the throne can produce remarkably quick changes. Either Cue the Sun or Happy Rain is possible, depending on what effect the Big Bad had. A full blown World-Healing Wave isn't out of the question if they were really bad.

May require a king of the right family. Of course, in those works, the rightful king tends to be The Good King.

The Trope Namer is the guardian of the Holy Grail in some versions of the Arthurian legends. He is wounded in the leg or the genitals and unable to rule; so he takes up fishing, while his lands rot (though in fact it's a pun on the similarity between the French words for "fisherman" (pêcheur) and "sinner" (pécheur).). To cure the king and his realm and win the Grail, The Chosen One (usually Perceval or Galahad) must ask him a specific question, which varies between accounts: usually something about the Grail, asking the king what ails him, or the average airspeed velocity of an unladen swallow.

Villainous Badland, Heroic Arcadia is the Super-Trope where the land doesn't necessarily have to change based on who rules it for the bad guys to live in a wasteland while the heroes live in a prosperous place. Compare Medical Monarch. Contrast Friend to All Living Things and Enemy to All Living Things, where their mere existence causes the changes (on a small scale). If the link is so strong that offing the king will instantly destroy the kingdom, he’s a Load-Bearing Boss.

If it's an explicit power of the ruler rather than the link being merely figurative, then it's also Royalty Superpower. See also No Ontological Inertia, Terminally Dependent Society, and Genius Loci. If the place has this effect on its inhabitants, it's a Fisher Kingdom. If you are looking for the film of the same name, hop on over to The Fisher King.

Oh, and this has nothing to do with the Grand Fisher of Bleach, Carrie Fisher, an ex-king of the Chess world or the character called Fisher King from the novel Lady of the Lake. And Huey Long, the Louisiana politician of the '30s known as the Kingfish, is completely out.

When Unicornio was ruler of the Enchanted Forest, everyone was free to do whatever they wanted; but when Owl took over, he insisted really mean rules which weren't fair and the forest became boring.

When Unicornio was ruler of the Enchanted Forest, everyone was free to do whatever they wanted; but when Owl took over, he insisted really mean rules which weren't fair and the forest became boring.