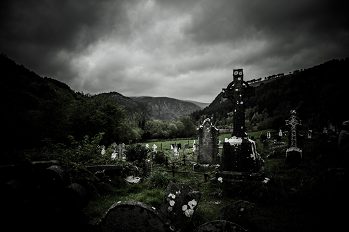 In fictional depictions of graveyards, burial grounds, or areas that serve a similar function, the weather is almost always bleak and grey at the least, pitch-black and raining at the worst.

Even if it's a sunny day, somehow, magically, the sunlight will seem shaky and bleak, washed out and faded. This is the weather of choice for a quietly dramatic funeral.

1000% more likely if this particular graveyard is a haven for The Undead.

A Sub-Trope of Empathic Environment and Gloomy Gray. See also It Always Rains at Funerals and Gray Rain of Depression. Contrast with It's Always Sunny at Funerals. See also Always Night, where spooky and general horror-themed areas (and the odd Haunted House in a perfectly normal street) will be in permanent night with thunder and lightning optional. When the weather is actively hostile to our heroes, see Cue the Rain.