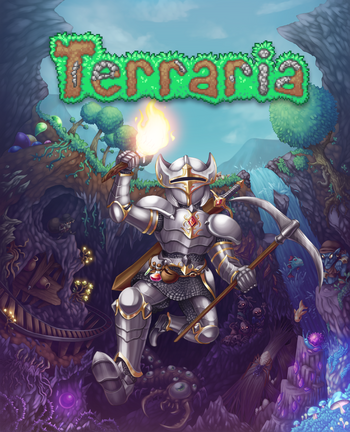 Dig, Fight, Explore, Build!
"Terraria is a land of adventure! A land of mystery! A land that's yours to shape, to defend and to enjoy. Your options in Terraria are limitless, are you an action gamer with an itchy trigger finger? A master builder? A collector? An explorer? There's something for everyone here."
Advertisement:

(pronounced similar to "Terrarium") is a very detailed 2D Wide-Open Sandbox indie game, created by Andrew "Redigit" Spinks and Jeremy "Blue" Guerrette. It was made available on Steam on May 16, 2011 and has received a ton of massive updates ever since. The game has since been ported to nearly every seventh- and eighth-generation console available,note excluding the Wii and versions have also been developed for iOS and Android devices.

Terraria focuses on exploring the gorgeous randomly generated world you're stranded in, to find resources to build a cozy home, equip yourself with armor and potions, befriend merchants, and defend your town from monsters. You start from scratch with little more than a pickaxe and some trees and end up crafting epic-level equipment to fight massive demons, dig cave systems throughout the land, and build a fortress that can withstand full-on invasions. You can share every world you create with your friends in single-player and multiplayer, and freely visit any map with any character.

The game is an item-based RPG variation on some of the most popular randomly generated exploration games, particularly Minecraft. True to classic Metroidvanias, a strong focus is on finding upgrades to help you move around in the world better (such as accessories to let you breathe underwater) and increase your life and mana pools. You also end up with multiple helpful NPCs living in your homes that will sell things to you, heal you, and otherwise enhance your base through their services. Terraria has boss monsters that will challenge players who dare to summon them, and murder those who aren't ready. Players can choose between Normal mode and Expert mode (which determines how difficult and rewarding the gameplay is), and can also choose a permadeath mode during character creation ("Hardcore") which makes the game a true Roguelike. Finally, Terraria features a streamlined crafting system as well as many, many decorations so that you can truly make your home your own.

and that's not covering the console and mobile sales), Terraria also received its own line of toys, and there was an (aborted) attempt at making an online animated series based on the game. (The released episodes of the series can be found here.

a sequel, currently titled Terraria 2, is in the works. A small team will continue to work on the original Terraria however. Terraria Otherworld,

an Alternate Universe spinoff, was once in development, and a trailer

due to the team considering that its development was excessively time and resource-consuming while leading nowhere. Its soundtrack has since been reincorporated into an alternate set of tracks for the main game.

Eight years after its release, the developers announced at E3 2019 that the original Terraria would receive its fourth and final major update called "Journey's End,"

which released on May 16 2020, the game's ninth anniversary. Some of the major things it includes are an even more difficult Master mode, a bestiary, and golf. tModLoader,

the long-standing mod loader made by the fanbase, was also announced as being added to the base game as free DLC on Steam.

This is going to be a terrible night...