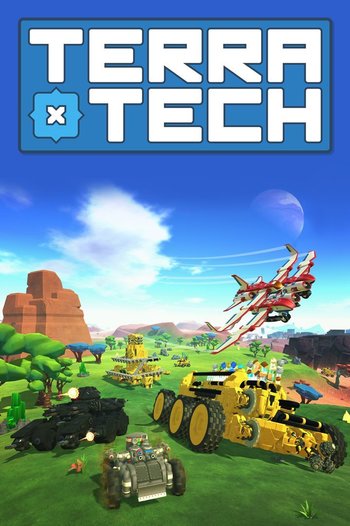 Cover artwork for the Xbox One release
TerraTech is a sandbox vehicle-creation and exploration game for the PC, Xbox One, Nintendo Switch and PS4. It was officially released on the tenth of August, 2018, after four years in early access.
Advertisement:

In the campaign, the player is a prospector gathering resources on a faraway planet and launching them back to Earth from a cannon. They can customise their mining rig, or "tech", with hundreds of blocks and tools that snap together to form just about anything, taking it from a tiny car with a drill on the front to a mountain-sized tank, mountain-sized aeroplane, an entire AI-controlled fleet or a mobile base which can craft when it sets down. Vehicular Combat quickly sets in as rival prospectors drive their techs along to destroy it all.

Six different corporations offer the player membership: Hawkeye, Team Venture, GeoCorp, Better Future, Reticule Research and the Galactic Survey Organisation. As the player fights enemies and completes missions for each company, they level up their licenses and unlock more powerful equipment, but stronger opponents are sure to come sniffing around for their parts.

The game features an arcade-style racing mode, the Gauntlet, where the player can design a custom racing tech and take on one of two racecourses, featuring hostile turrets, ramps, slaloms, jumps through hoops and the occasional explosive wall. Players can try as many techs as they fancy on each course in order to achieve the fastest time, competing on a locally-hosted leaderboard against whoever else plays TerraTech on the same computer. Players can share racing ghosts to take each other on.

A Competitive Multiplayer mode allows players to select from eight pre-made techs and blow each other up in one of three arenas. Players can steal parts from downed enemies and find powerful weapons in crates that fall from the sky to grow stronger. The host for each match can choose between a free-for-all and a team-based battle. Alternatively, up to four players can work together in creative mode or a slightly stripped-down campaign with no crafting.