In the campaign, you play as a prospector carrying out a survey mission for the GSO who crash-landed on an alien planet. 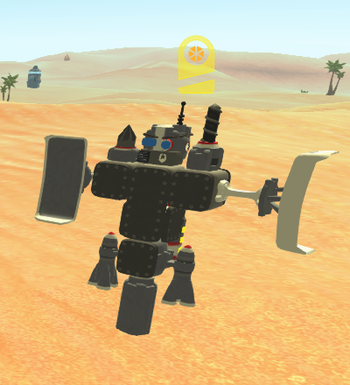 A con man who knows his way around GSO crafting systems. In the Crafty Business questline, he teaches the player how to refine, sell, process and otherwise manipulate resource chunks. His real name is Michael Croft. 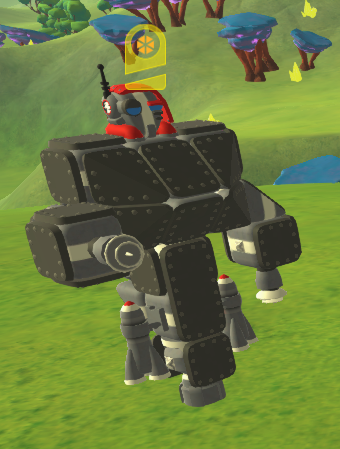 A fierce warrior in charge of local peacekeeping for the GSO. Dealing with useless prospectors has left her cynical and given her a bad habit of mumbling insults at people. During the campaign, she enlists the player's help in dealing with bandits. 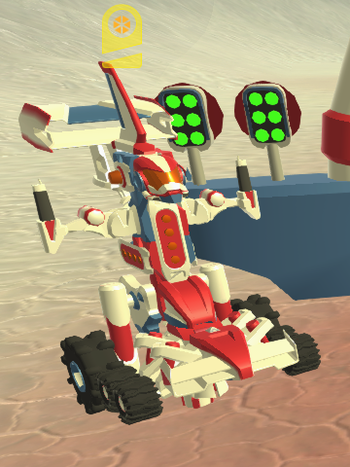 A friendly woman shaped like a racing car. As head of recruitment for Venture, she challenges the player to prove their worth against a variety of race courses, some of her own design, and introduces them to powered flight. Word of Former Social Content Producer posits that she's thicc. 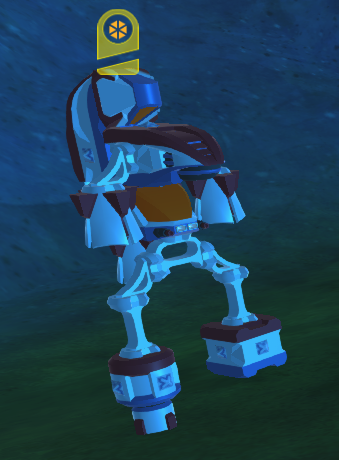 A tech/person made primarily from Venture parts. He isn't much use in a fight and was captured at one point by Gruntle, needing the player's intervention to save him.

A misanthropic turret who wields sonic lances and uses them to push people away. 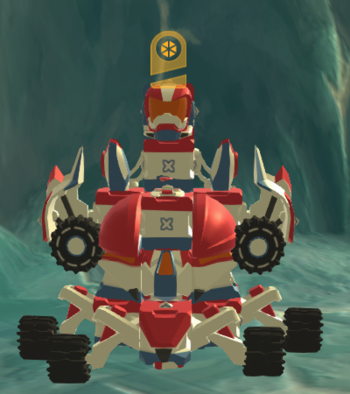 Vana, the red brother. Zozo looks pretty much the same, except blue and with earmuffs. 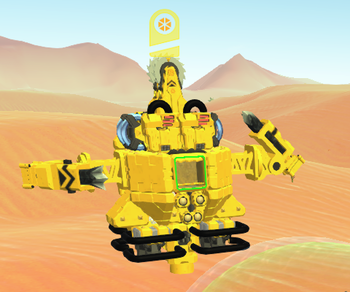 GeoCorp's quest NPC who gives the player their license. Pete is a fat, jolly chap whose work ethic is not as great as it first appears. 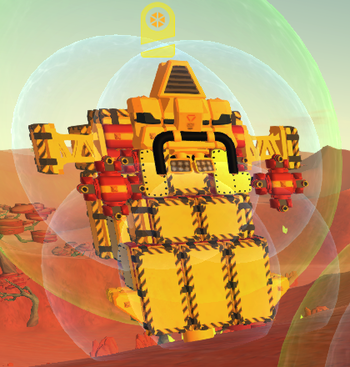 A big, strong ne'er-do-well who challenges players to destroy his creation, the Almighty Cube, and tries to sell them GSO cannons at a huge mark-up if they fail. He is arrogant, vain and obsessed with the Cube, but prefers to leave any fighting to his minions. 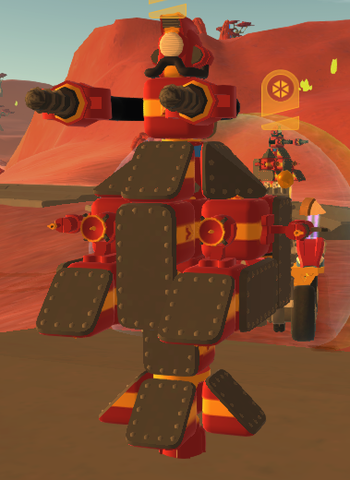 The servitors of the Almighty Leader. They are identical groupies who copy his moustachioed cyclops aesthetic, follow his martial philosophy and pay him hefty membership fees. 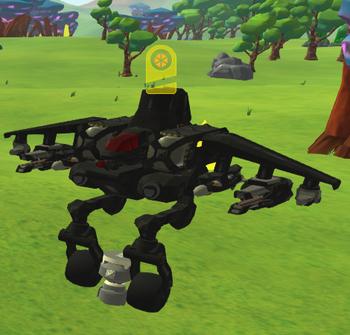 The tough, bullish Hawkeye sergeant who becomes the player's SO when they join Hawkeye. He tasks them with destroying enemy turrets in addition to any tech that so much as looks at them. 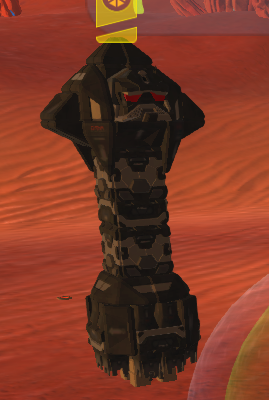 An officer in Hawkeye's air force who enlists the player's help for a bombing mission. He has the voice and the moustache of a dashing fighter pilot and the physique of a sentient air traffic control tower.

The agent initially sent by Hawkeye to confront the Spider King. 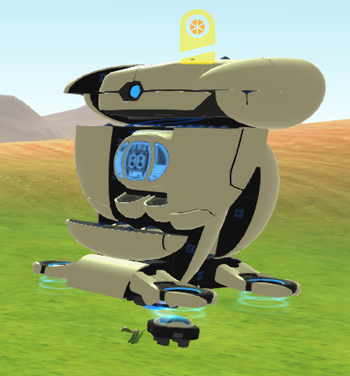 Technically not one individual but a type of sales robot sent out by Better Future, from which you can buy a reasonably priced Better Future license. Various hubl units teach the player how to pilot hovercrafts and anti-gravity airships, basic models of which they sell at excellent value. 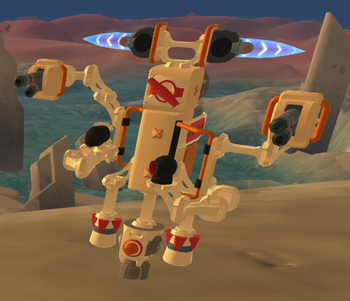 Please note that "guardian" is the word used for any pre-defined enemy guaranteed to appear in the campaign; for example, Little Thief, the tech the player has to destroy in order to get their radar. They do not have to actually guard anything.

A rival prospector who ambushes the player after their crash-landing.

A weaponless tech that swipes the player's lost radar block after the crash.

The first boss, who must be defeated to unlock trading stations. She/he shows up in a random tech using level 2 GSO parts. 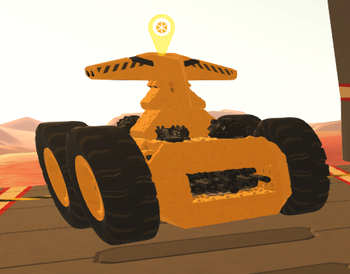 A large, arrogant tech who likes to throw his weight around. The player comes into conflict with him after he claims ownership of Rook Creek Bridge. 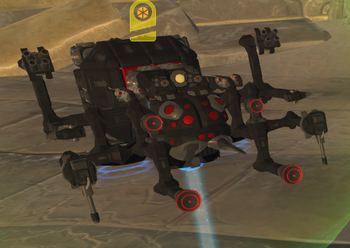 A spider-shaped tech with his own fortress and some agile hovering minions. 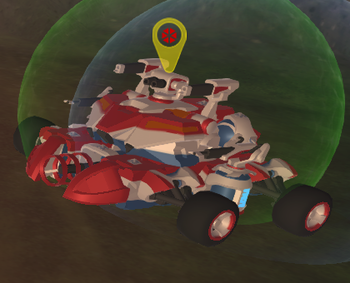 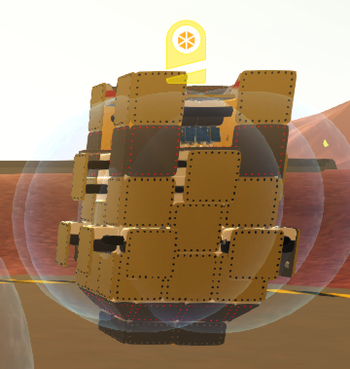 An armoured cube built by the Almighty Leader to challenge prospectors and embarrass them into buying expensive cannons. Each version of the Cube can take quite a beating.

A government-run mining company created to help new prospectors build their techs and get into off-world mining. The default starting corporation, the GSO are outclassed in at least one area by every other corporation.

An extreme sports organisation. They offer the fastest wheels in the game.

A mining company which specialises in heavy equipment and massive techs. Their drills and plasma cutters function as the game's strongest melee weapons.

A corporate military organisation. Their weapons and shields are the strongest in the game.

A new startup specialising in ultra-sleek, ultra-modern hover techs and aircraft. They offer a small selection of powerful laser weaponry and a variety of useful devices, such as anti-gravity engines and off switches for shields.

An experimental technology company which offers big, powerful, strange and hard to use weapons.