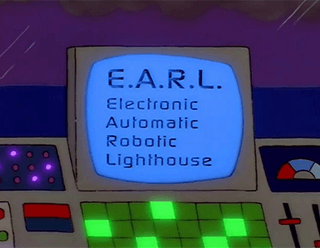 The Doctor: What are you then?
BOSS: I am the first Biomorphic Organisational Systems Supervisor.
The Doctor: B, O, double S. The BOSS.
BOSS: Precisely.
The Doctor: Ha!
BOSS: My designers also found it amusing. I find it suitable.
— Doctor Who, "The Green Death"
Advertisement:

Whenever you come across an AI, sufficiently-expansive computer program, or robot, it is likely to have a name disproportionally consisting of ALLCAPS (sometimes with Leet Lingo sprinkled in in place of letters). As it turns out this is not just for show; very often the AI's name is actually an (often easily pronounceable) acronym for a much longer actual name that's at least tangentially related to its primary function(s).

Reminder: for an acronym to qualify it must be related to the AI/program's function. Remember to add context regarding such, even if it's Exactly What It Says on the Tin.

Sub-Trope of Fun with Acronyms, Meaningful Name, Names Given to Computers, and Robot Names.